Certain groups of people have a really tough and scary look. Nearly in all of the cases, these people are covered with tattoos or specific tattoos that make you want to stay away. These groups of people that we are talking about are bikers. But in this case, we are not talking about Tour De France bikers. There are some exceptions, but when many of us look at bikers covered with “biker” tattoos, we cannot avoid wondering about their personalities. In the “real” world, this is far from the truth since these people are very ordinary. The thing that makes bikers different from others is the fact that they enjoy wearing leather and ride Harleys.

When it comes to bikers, we often wonder about the meanings behind the tattoos that are covering their bodies. There are lots of different symbols and images that we can see on the bodies of bikers. Some of their tattoos are used to represent their membership, and others are just universal lifestyle tattoos that correspond to their love for motorcycles. Having tattoos and riding a bike doesn’t mean that you have to be part of a gang. Most of these examples are for the average motorcycle enthusiast.

The meaning of the biker tattoo mostly depends on the owner of the tattoo. It also depends on the choice of the image that is part of the tattoo. When it comes to a biker tattoo, there are a lot of different directions you can go, but the thing that you have to remember is that all of these tattoos represent one thing- The love for motorcycles and riding them. People who own biker’s tattoo are the ones that have figured something out, and that is a way out that we should all praise them for that.

People who ride motorcycles tend to tell other people who have never ridden on a motorcycle that they don’t know what they are missing—things like the wind throwing your hair back and smelling the air that you’re driving through. Riding a motorcycle on the open road makes you feel exceptional. This is the key reason why there is such an influential motorcycle culture in the world, and it also makes it clear why some get tattoos confessing their love of the lifestyle.

For a very long time, getting away on your motorcycle has been a way to run away from the boredom of everyday life. It’s an exceptional thing to be able to hop on those two wheels and leave everything behind you. Those people who had a chance to experience riding on a motorcycle can tell you that it isn’t just about a way to reach your destination, but a whole lifestyle for people who are somehow marginalized to feel as being part of something big.

Due to its slightly abrupt entry into what we know as the mainstream, the motorcycle has sparked the attention of media all over the world. However, there are times when the small percentage of people that rides in the world end up getting a bad reputation because of movie themes about certain gangs. On the other hand, motorcycle enthusiasts’ status is on the rise because our delusions are being tuned, and that is a good thing. 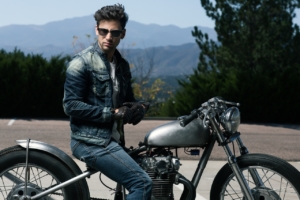 This is the kind of biker tattoo that appears to be more popular among older people. This is because, in the past, when the older generations would ride, the connection was less than stellar, so bikers always felt as if they were not part of the society, but instead outcasts. The skeleton riding a motorcycle tattoo is a representation of death or the darker parts of life. People with this tattoo are revealing that they are accepting the negative views that people had.

The Harley Davidson tattoo is a very popular tattoo that most of the biker enthusiasts decide to get. Harleys have international fame and are also popularly known as being some of the best made and best quality motorcycles on the whole planet. To get yourself a Harley Davidson means that you are truly devoted to the biker lifestyle. When people think of a quality ride, they think about Harley Davidson, and those with this tattoo would agree.

When it comes to biker tattoos, there are always those tattoos that are used to represent motorcycle clubs. Each club has a different logo that is recognized for. From the Hell’s Angels to the Christian Motorcycle Association, the patches worn or logos tattooed are a symbol of whatever they believe in.

No matter what your final choice about the biker tattoo is going to be, make sure you are happy with the designs and what it means for you.