Many people in the world believe that tattoos are only some pretty pictures and adornments, but they are completely wrong. Since their appearance in the 4th millennia BC, tattoos always had meanings to them. Whether it was religious marking or some illustration about particular lifetime achievements of humans, they always conveyed messages of some kind. Skipping forward to our age, there are tattoo symbols that have lost their intended context along the way. However, there are still people who like to translate hidden messages and deeper meanings and symbolism into their tattoo ideas.

Here, we will talk about tattoo designs that might look ordinary, but each of them contains its own unique meaning. Some of them can change their meanings, depending on what angle you are looking at them. Some of them only work when they are in combination with others too.

Here are the six tattoo designs with unique meaning and symbolism in the world of tattoos: 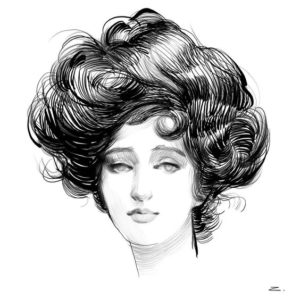 Irene Gibson was the ideal in American female fashion and beauty at the turn of the century. Her husband, the artist Charles Dana Gibson helped her in no small part. With her long hair piled high and left trailing in several tresses, she became one of the first glamour girls. Other women admired her, while men coveted her.

Her image, although generic, became a staple in the flash of tattoo shops of that period. This woman with dark, flowing hair and rosy red cheeks had an authentic meaning in the tattooing world later on.

The hei tiki is actually the amulet that the Maori of New Zealand is using. They used it as the more general Tiki god symbol for Polynesia. The Maori pendant actually resembles a human fetus, with head bent on one side. Typically, they carved it from shiny green stone.

The hei tiki finds its uses as amulet among women. Moreover, in the tattoo world, this design is famous for its unique, possessing magical and protective powers.

Jack-O’Lantern, or the pumpkin carved with a face and lit from within by a candle, is the unique symbol of Halloween. Many of the customs of Halloween are present in the history of Britain, including the origin of this one. There are legends that attribute it to a night watchman.

Moreover, others attribute it to a scoundrel that was successful in tricking the devil. He needed a lamp to navigate from hell back to Earth. In the original version, people placed a candle in a turnip. However, when the Americans transplanted the legend, they replaced the turnip with pumpkin. The use of Jack-O’Lantern in tattoos is unique because it represents Halloween and nothing else.

The motif of beard pullers, whether interlocked as in design from the Book of Kells or just standing, is not an isolated example of Celtic knotwork. The beard pullers motif has ancient historical roots in Islamic art. There, beards find their association with men while beard pullers with conflict and dispute.

When Islamic and Christian cultures and societies started meeting, there was direct borrowing of images sometimes. However, the meanings that find their associations with them can’t be easily absorbed or understood. In Islamic art, there was probably an entertainment aspect, as in the performance of professional wrestlers or mock fighters. However, after entering Christian iconography, they became the unique symbol of the vice of discord and moral exhortation against aggressive struggle.

Many of the warriors or heroes of the Japanese legends and history appeared in tattoos. However, Goban Tadanobu is definitely the most famous and also one of the most easily identified tattoo designs. Together with his master, Sato Tadanobu, he struggled between warring clans. He is the tragic hero for who the Japanese people always had the highest esteem. He was bold, single-minded, betrayed, utterly-loyal, and dying without complaining in the face of hopeless odds.

In one fight scene, he uses a go board as a weapon; therefore, it became its nickname. The board is a low and thick wooden table. It has a grid for placing the small, and circular black and white tokens of the game. His muscular form and the go board are the trademark symbols for this famous samurai. That is what makes it a unique tattoo design too.

The Hell’s Angles were probably the first motorcycle club. However, they didn’t start out on motorcycles – they started in airplanes. Flying Tigers, an air combat unit of Americans, volunteered to fight for the Chinese. This happened somewhere in 1941 before the U.S. entered the Second World War. One of the squadrons had the name Hell’s Angels. Their commander, named Arvid Olsen, painted the name on all his fighter planes. When he came back to Southern California, he started motorcycle riding with other veterans. They were wearing their familiar wartime clothing of leather boomed jackets, heavy boots and helmets, and goggles.

Nowadays, the Hell’s Angels tattoos show the familiar horned skull in profile with an angel wing flaring out behind it. This tattoo is similar to the death’s head tattoo, but it is unique and holds great meanings in its way.