A time of romance, as well as violence in the United States, the Wild West period became a cornerstone of American culture. From some gunfights and bar brawls to horses, as well as Western romance films, nostalgia for this period constantly grows, and some central symbols were transformed into tattoo designs.

If you are looking for some piece of body ink design that has certainly gained some popularity over the last years, the Wild West tattoos will be a huge source of creative inspiration for you. No matter if you have a fondness for everything related to the Wild West or you also grew up in this lifestyle, and you want a permanent reminder of your youth, there are a lot of popular designs and styles from which you can choose.

In this article, we will present to you the cowboy and cowgirl tattoos from the Wild West, which were both parts of the rural American experience.

The cowboy tattoos are becoming an increasing part of the culture of the Wild West. These bits of Americana were a mainstay for tattoo artists at the turn of the last century. 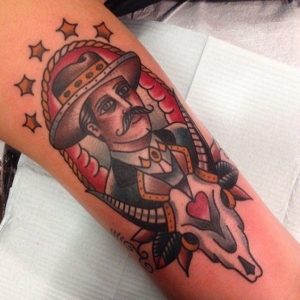 Immortalized in history and folklore, the American cowboy stood for rugged individualism. Likewise, the rodeo cowboy was the symbol of the hardworking and played hard ethic, which was characteristic of the lives of these ropers and riders.

These tattoos are designed in a lot of different ways according to what an individual wants to portray. One of the most popular is the image of a cowboy that rides a horse or bull, even though there are also some other that embrace the traditional hat and boots.

There are tattoo designs that portray a full-blown image of a cowboy, while there are also others that show a scene including some related Wild West elements, and some are simply portraits.

Surely, just like most art, there are some tattoos of cowboys that express the love of a person for another person, such as a dad or a lost loved one that may have either been a cowboy or lived such a lifestyle. As for words of messages, in this type of tattoo, the phrase ‘cowboy up’ is by far the most popular one.

Regardless of the reason, the tattoos are part of cowboy culture, and there are a lot of cool ones that we can look at in order to see where the art has come to.

As a tattoo design, the cowboy is also a symbol of yearning for freedom, as well as nostalgia for the Wild West.

Cowboy and western life are often inundated with meanings and symbols, which include those that are entertainers and those that entertain us through rodeo, as well as some other means. All of this joins together to represent a part of the lifestyle, a life which fewer and fewer people know about or also identify with.

Saying this, the cowboy remains an integral part of societies all over the world, as his ever-changing role continues to still catch the gleam in the eye of those that appreciate, as well as understand the importance of this unique and excellent people.

Usually done in a bold traditional style, the cowgirl tattoos are an excellent piece for every person that looks into old school women and pinup tattoos.

The cowgirl, just like the cowboy, was a part of the rural American experience when this type of tattoo had been the most popular one, near the turn of the last century. Even though nowadays the cowgirl is most definitely a pinup girl and an American sex symbol, the pretty cowgirl tattoo of times past might have included ringlet curls under a stylish hat, or also a short buckskin skirt with boots.

The history of women in the Wild West and those that worked the cattle ranches are not as well documented as the history of the men. Nonetheless, cowgirls made their mark on the west, and they also did just as much as their male counterparts.

Cowgirls worked side by side with men, and they did their jobs equally well, if not even better than men, and America would certainly not be what it is nowadays without the humble cowgirls. So, why not to show these lovely women with some straight-shooting cowgirl tattoos.

Cowgirl tattoos are one of the classic tattoo girl designs, and usually, they feature a beautiful looking woman in a typical cowboy hat, neckerchief and occasionally with a horse.

For a lot of people, the Wild West recalls a time of freedom and adventure. With all of that rowdy bull riding, time spent outdoors in the fields, and idyllic romances, it is no wonder that the Wild West has found a place in the heart of the tattoo enthusiasts and lovers.

Both the designs which we mentioned above are some of the most common ones from the Wild West, and the most appealing too.