This dog, which is also known as the English bulldog or British bulldog, is a breed of dog which has a small to medium size. It is a muscular, as well as a hefty dog, which has a wrinkled face and a distinctive pushed-in nose.

Bulldogs have a longstanding connection with British culture, and to many, it is a national icon, which symbolizes pluck and determination. The tradition of using these English dogs as a mascot for the United States Marine Corps is believed to have its roots in World War I. During World War II, and Bulldogs were usually likened to Prime Minister Winston Churchill and his defiance of Nazi Germany. Also, the German soldiers referred to the Marines as Teufel hunden or “devil dogs,” based on their fierce fighting ability. 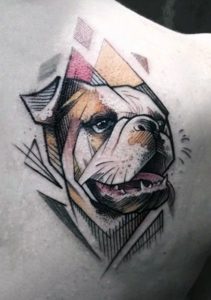 Soon afterward, the bulldog mascot, wearing a helmet with the eagle, globe and anchor insignia, was depicted in Marines recruiting poster chasing a dachshund wearing a spiked helmet and iron cross, and the tradition was set. The Marines relished the symbolism and started using this dog in recruiting ads for the United States Marine Corps or USMC. Because of this, a bulldog tattoo is a common choice for US Marines too. The USMC bulldog was and still is one of the most recognized symbols in the military.

Bulldog tattoos are usually chosen by those that wish to represent their English pride, as well as their heritage. In this case, the tattoo may also depict the English flag or some other symbols tied to England, such as St. George’s cross, a red rose, or the Three Lions crest.

But, what does this tattoo represent and mean?

Besides England, as well as the USMC, the bulldog tattoo can represent several other meanings, such as the following:

Before you get your tattoo, you will want to examine the different kinds of bulldogs, as well as make sure you choose the one which attracts you the most. In the end, your tattoo symbolizes what you want it to.