A tattoo is the most common versatile body artwork. It can take any design, style, or symbol. For example, there are a lot of tattoos that can be very elegant. There are also those with very specific meanings and symbolism. There are even not so common tattoo designs, but with special meanings, like frog tattoos which are very popular nowadays. There are popular tattoo designs that every tattoo lover adores. 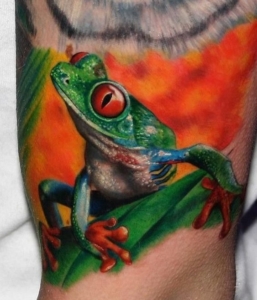 Here, we will talk about these tattoos, which are quite elegant in nature. They are very popular, and most of us have probably seen such tattoos without noticing.

The frog is right now, and extremely popular animal image around the tattoo world and people usually select it from a seemingly infinite number of potential types. Much of the popularity of any tattoo designs is not symbolic, but it is rather aesthetic. Taking this into consideration, the frog is an excellent choice for several reasons, as it can be unbelievably and vividly colorful, with texture or wetly gleaming, by itself, or in its watery environment.

Frogs can have several different meanings, but some of the most common are:

This animal is actually proof that transformation can lead to liberation. Metaphorically, transformation permits the frog to walk in two different worlds. Through the mind-blowing self-evolution, the frog actually emerges victor of both water and dry-land. It also becomes quite adaptable at land life as well. This symbolizes adaptation.

If you feel that you tread water in several life areas, and teeter on the landmasses of other life parts, the frog can remind you that you can really live in the two worlds. However, you have to prepare yourself to make adjustments to make it work. You need to be willing to undergo some major inner changes so that your outer worlds will become more inhabitable. That is the best thing that frog symbolism can convey.

Maybe this type of symbolism is what the ancient Egyptians tapped into when they actually assigned the frog as the sacred symbol of birth and resurrection. Their frog-headed goddess was named Heket. She was present at every new birth and even exhaled the breath of every new life into the nostrils of a newborn child in Egypt. The spirit of transformation, renewal, and adoption passes through her breath. She imbued a sense of natural revolution, and she puts new human beings at ease with the concept of cyclical changes.

There are a lot of cultures worldwide that have various perspectives of the frog. Every culture is going to have its own belief, and for that, there is no specific origin of the tattoos.

Frogs are benign, as well as unthreatening choices, and are even visually appealing at the same time. When taking symbolism into consideration, there is a vast and unbelievably rich history behind the use of the frog design.

When tattooing took its course and spread worldwide, different cultures applied these tattoos. From the Romans to the Aztecs, and from Japan to India, the small and vocal creatures came to symbolize all manner of spiritual and emotional aspects. Such aspects mostly come from their natural behavior.

Two common threads that seem to run strong are the symbolism of fertility and magic. In the west, you don’t need to look far for such meanings, when it comes to fairy tales of enchanted princes.

In Native North America, they were utilized to symbolize prosperity and wealth. They even believed that the frog was a rainmaker. The Japanese utilized the frog drawings in order to symbolize tolerance and energy. In Egypt, the frog was the symbol of journey mercies, life, and fertility. Some cultures even associated this creature with a masculine connection. The Celts believed that the frogs have natural healing powers, as they mostly lived in water.

Since such tattoos are usually an inspiration from different cultures, they are going to have different meanings. The details of the frog, and also the type of the frog which you apply, will determine the meaning of your tattoo. Frog tattoos can symbolize good luck. These tattoos have their associations with Christianity, and some Christians associate them with the life of Christ.

In the life of the frog, it is going to develop from an egg to a tadpole, and then to a fully grown frog. This is its relation to the life of Christ, from his birth to his suffering, and his death, and then back to his rebirth.

Because of that, another symbolism of this tattoo is rebirth and restoration. It is the symbol of the transformation and existence of a new life. Such tattoos find their uses by people that change their lives for better. When in combination with wings or floral patterns, they can symbolize tranquility, peace, and tolerance.

So, before you decide to get this tattoo, search a little bit about its meaning and symbolism. After all, your tattoo will symbolize what you will like it to symbolize.