Very similar to the Anchor, the Starfish tattoo, known as Stella Mara (Star of the Sea), is a revered symbol in maritime and tattoo culture. Being an emblem of the Virgin Mary symbolizes salvation and sanctuary in troubled waters and is a favorite amongst sailors. But there is so much more meaning to this seemingly unusual little creature than meets the eye.

The Starfish is considered a tough little one. Same as the lizard, if it feels threatened, the Starfish can sacrifice a limb in the name of survival. Ancient Egyptians were mesmerized by this ability. 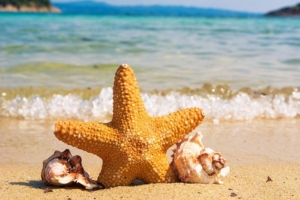 This is the particular reason why the Starfish became revered as a symbol of Regeneration and Renewal. This gift is probably the account for why these small creatures are well known for Strength and Resilience.

So, if you are in the middle of overcoming a difficult time in your life, just remembering, you are as tough and resilient as the little Starfish.

The Meaning of the Starfish Tattoo

The Star of the Sea is something that brings a whole specter of characteristics to your body art. The reasons why this little Starfish tattoo is so appealing to those who adore body ink are the various meanings that come with this bottom sea creature. The Starfish carries a lot of characteristics, such as:

These tattoo designs can also be used as a representation for someone patient, strong, intense, magical, and moves according to their beat. Not only are these creatures fascinating to look at, but they also link those who have a love for the stars and see this sea creature as a symbol of the stars under the sea as above.

The History of the Starfish Tattoo

The Starfish indeed have a deep history behind them throughout the ages. In the Christian religion, the Starfish the symbol of the Virgin Mary, who creates safe travel over troubled waters during trying times. In the Egyptian legend, the starfish meaning has been connected to Isis, the mother goddess who was the mother and friend to slaves. In Roman mythology, a starfish symbolizes the love goddess Venus, born from foaming tides of the Adriatic. Venus is connected with the Starfish because she’s a sensory goddess. Native Americans used to carve the Starfish into Haida totem poles to mark the lineage of the branch. They saw the Starfish as super-strong and believed its ability to regenerate makes the Starfish immortal.

Even though the Starfish regrows a limb out of necessity, people see this as healing of sorts. Those who have problems with health or face emotional challenges can draw upon the powerful healing process of the Starfish.

While the renewal process is different for humans, at the core, it simply means a person can find a way if they are strong-minded to get past an addiction, abusive relationship, or loss of a loved one to facilitate healing.

Ideas for a Starfish tattoo

The tattoos that include these enchanting creatures can be in various hues and feature any number of design elements. Tattoos of Starfish are usually very colorful, and in most cases, have marine elements like conch shells, seaweed, or waves incorporated in the design. Some of the popular Starfish Tattoo variations include:

Tribal Starfish Tattoos tend to be a perfect choice for those who have a strong love for the sea. Indigenous peoples from regions with rich sea/maritime history have many markings that represent these beautiful animals. This is why tribal patterns that relate to marine animals tend to be found in these areas. The Starfish is also thought to embody the protection of the Virgin Mary. Sailors choose to get inked with a Tribal Starfish in an attempt to win her blessings and guidance for a safe voyage.

The fact that Patrick the Starfish is the best friend of SpongeBob is not a coincidence. These little creatures make the perfect children’s story character since, in real life, they are as intimidating as harmless sponges. For some people, cartoon starfish tattoos bring back childhood memories, evoke images of innocent, playful kids for most, and show off your positive side.

You can never be sure that you are going to love your Patrick Starfish tattoo after twenty years. One of the greatest “problems” for tattoo wearers is whether or not people will still admire this artwork in the future. What does your new tattoo will symbolize? Where will it be located on your body? To be certain that your piece will last the test of time, it’s important to invest the resources needed to create a great design.