Dragons create popular and powerful tattoo designs, which both men and women wear. Although we can design it in different sizes, the detailing and shading in most depictions make it a large-sized project. Some of the main traits and attributes which find their association with the dragon are courage, independence, and strength.

Dragons are usually one of the most legendary creatures in the history of folklore and mythology. Dragons form part of the historical culture of Japan, China, Vietnam, and many other different countries. 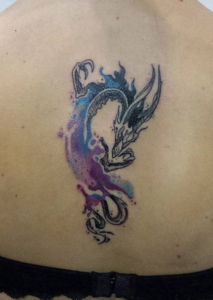 A dragon is a large, and serpent-like legendary creature which appears in the folklore of different cultures worldwide. Beliefs about dragons usually vary by region.

However, in Western cultures, they are usually presented as winged, four-legged, horned, and capable of breathing fire. Dragons in the Eastern cultures are often without wings, with four legs, and serpentine creatures with above-average intelligence.

The earliest attested dragons resemble giant snakes. Some dragon-like creatures were present for the first time in the mythologies of the ancient Near East.

They appear in ancient Mesopotamian art and literature. Different stories about storm-gods slaying giant serpents happen throughout almost all Indo-European and Near Eastern mythologies.

According to most Eastern civilizations, dragons were noble creatures that had different powers and honors. In the mythologies of European civilizations, they were often considered dark and evil.

The symbolism of dragon tattoos covers a wide range of meanings. For example, one civilization will consider dragons the symbol of wisdom and strength. However, another may consider them to be a bad omen and greedy. The Japanese, Celtic, and Chinese dragon styles are among the most popular ones.

The Eastern dragon represents a noble beast that offers protection and wisdom. However, in the ancient Western culture, it represents a much darker, and more threatening creature.

Both are often depicted as a very intelligent creature, which is free to roam wherever it wants. Thus, dragon tattoos may also depict the freedom of the soul or life.

Another symbolism of the dragon is protection, wisdom, and power. Its warlike and fearsome qualities make it an excellent ally or a fierce enemy. Many people have heard some stories about the knight slaying the dragon and winning the love of the princess. Among different ancient cultures, slaying the dragon is among the highest honors a person may achieve.

In Oriental myth, the dragon couldn’t be more opposite to its Western counterpart. Dragons in Oriental art don’t have wings, and they don’t necessarily breathe fire. However, flames often erupt from their limbs. They are not creatures of Earth but combine some elements of the water and air. They are also equally at home in the ocean or the clouds.

Although they represent power and strength, dragons above all are a reconciliation of opposites. They are a combination of yin and yang. Moreover, unlike the Western dragon, the Oriental one is not a cunningly malevolent beast. Rather than that, it is strength combined with wisdom, and it is benevolent.

Moreover, it is not unusual to see a dragon clutching a ball, or a pearl, or even a jewel in one of its claws. This item usually has the closed-lotus form which is present in different Buddhist designs, which include the ones in temples and on grave markers as well.

The Japanese dragon represents the spiritual essence of the Universe, by which it controls the winds, rains, or planets’ movements. Moreover, it protects it from those that might usurp all those powers. Just like other Japanese tattoos, the choice of a dragon is the aspiration to these same qualities of wisdom and wholeness.

It is probably the most popular Japanese-style tattoos, and its depiction is with great variety. This is in terms of body position, the environment. It is also in terms of the degree of hostility in an aggressive or passive position of the jaws and claws.

The Japanese dragon is probably the most popular mythological creature picked for tattoo designs. There are many different styles you can choose from. People in Japan believe that the dragon has the ability to multiply everything that it touches. They usually find their associations with the sea or heavens. Japanese dragons are often wingless and slender and have only three claws.

Another thing that this dragon represents is balance. The colorful Japanese dragon, part of their cultural mythology for hundreds of years, represents freedom, good luck, and balance. Moreover, it is famous for having supernatural powers and wisdom.

Japanese people view dragons differently than people in the West. The Japanese see dragons as protectors and benefactors of mankind. Dragon tattoos are a symbol of strength, courage, and intelligence. The black ones with their association with wisdom and experience, while the green ones with nature. The gold dragons represent value and many other virtues, while the blue is benevolent, gentle, and forgiving. Also, the white-yellow dragons are noble companions.

There are many variants of this tattoo design you can choose from. Make sure you choose the right one!