The tattoos known as they hear no evil, see no evil and speak no evil are very popular tattoos. These kinds of tattoos are often referred to as wise monkeys or mystic apes. Nowadays, lots of people make use of other symbols or characters in place of the monkeys to get across the same meaning or symbolism. They also add a unique twist to their tattoo design and still be similar to the real monkey tattoos. Whether it is three skulls, three cartoon characters, or zombies, the deep meaning associated with hearing no evil, seeing no evil, and talking no evil tattoos is unique. 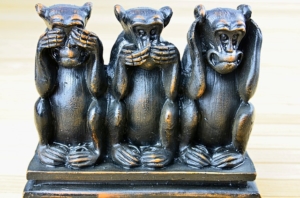 Origin of the three wise monkeys

It is unknown when the three wise monkeys first appeared. They have been brought into Buddhism by a monk in the 7th century. The legend says that this monk, while he was traveling, was escorted by a monkey. His name was Xuanzang, one of the most important translators of Buddhist texts in China. He decided to leave China for India after he realized that it was time to seek more Buddhist texts to bring to China.

However, he’s not the one who invented the three wise monkeys, but instead, the one who made them known. The first traces lead us to the Analects of Confucius (between the 4th and 11th century BC). Various legends assume that those three monkeys came from Japanese Koshin’s belief. They are thought to be based on the idea that, in every human being, there are three wicked worms, the Sanshi, which, every sixty days, leave our body to report on our sins to a superior entity known as Ten-Tei. Still, it’s challenging to make the difference between legend and reality.

Furthermore, one of the oldest known representations of those three monkeys is Nikko, Japan, in front of the Tshogu temple.

According to the Japanese language,” san” means three, and “Saru” means monkey. Time passing, “Saru” becomes “Zaru,” giving birth to “sanzaru.” However, “zaru” is also a negative form that we could translate to “not to.” We can say that the common admitted meaning “not see, not hear and not speak” could come from a Japanese play on words. Additionally, in Japanese culture, the monkey is supposed to ward off evils.

Meaning of these three wise monkeys

The three wise monkeys are supposed to symbolize a way not to feel evil since common sense is: not to see anything, not to hear anything, and not to say anything. But can it be that simple? This is such a philosophy that can hardly be reduced to this only sentence.

Through those monkeys, we have another approach: not to see the evil, not to hear the evil, and not to say evil things. According to this idea, each time we see something terrible, a part of it enters our body. In the same sense, hearing the evil or speaking of it makes a part of us turning into evil. Those three little monkeys would represent a call to refuse the evil in our life.

However, this point of view is questionable. Should we close our eyes to evil? Are we supposed to shut up when someone says awful things? If we look in the past, such thoughts have led to horrifying acts. There is one thing guaranteed, and that is ignoring the evil won’t make it vanish.

The tattoos of three monkeys in the “hear no evil, see no evil, and speak no evil” stand for being of good mind, good speech, and good manners.

In the Western world, the phrase symbolizes those who must deal with impropriety by turning a blind eye. The symbol of the monkey dates back to Japan and is seen as a representation of the cycle of man. The monkeys have a close connotation to philosophy in Western culture, and the three are considered dogmas.

The Japanese are not the first to apply the three symbols. Before them, the Chinese had similar connotations to the number three and the diverse struggles of man.

Regardless of these three symbols, they held the meaning and symbolism of looking not at what is opposed to propriety, listening not to what’s contrary, and speaking not what is contrary.

The Japanese shortened these references into hearing no evil, seeing no evil, and speaking no evil tattoos that you see today.

The Unique Play on Words

Even though the meaning behind this saying has very little to do with a monkey, the play on words stuck. This saying originally means don’t see, don’t hear, and don’t speak. Nowadays, many people twist these words to signify simple beliefs or show how they are dealing with powerful inner demons that keep them from lashing out.

People commonly believed that money is the messenger of these words. However, today any character can be quickly associated with this unique tattoo design.

These three characters or monkeys, with their hands over their eyes, mouth, and ears, stand for the capability to walk away from evil, to abstain from conflict, to steer clear of distress, and to be working tirelessly to walk the straight and narrow path.

The tattoos they hear no evil, see no evil and speak no evil took on a life of their own. Different designs incorporate zombies with eyes stitched shut, mouth sewn closed, and a knife driven through the ears.

Today the tattoo can represent a person making changes to avoid their bad deeds being reported to heaven. Others use the three symbols to show that despite being watched, they will not give in to the rules of society.