Wizard Tattoo is something powerful and spiritual from an artistic point of view. It’s a design with deep and powerful meanings and symbolism. But let us start from the top and talk a little bit about this subject.

Fantasy or supernatural tattoos are a popular tattoo for individuals with a creative personality. Generally speaking, it can be a symbol of optimism, dreams, and hope. However, the symbolism of the tattoo is deeply rooted in a personal connection with the character; and even the choice of style. Dragons, fairies, and wizards are some of the most popular fantasy tattoo designs, but they are hardly chosen just to look cool. A quality tattoo always means something.

In the 1980s fantasy tattoos reached their heyday, and the main reason for that was the appearance of the game Dungeons and Dragons, and a rash of “sword and sorcerer” films. In the early ’90s, magical themes shortly returned to their typical realm of science fiction novels. The series of Harry Potter novels and the filming of J.R.R. Tolkien’s Lord of the Rings trilogy reignited interest in the genre, and wizards and all things magical were in fashion once again.

In the world of tattoos, wizards are more prevalent images than one of the witches, no doubt due to the mostly negative associations of the latter. Even though the wizard is not an entirely positive character, it is one of some neutrality. The most recognized characteristics of a wizard are age, implying wisdom, and the capability of conjuring magic and casting spells. His physical appearance includes a long, flowing white beard, and he may wear a tall conical hat while wielding a staff or holding a crystal ball. The wizard symbolizes the supernatural world and also corresponds to mysticism and ancient knowledge and the will to dominate the forces of nature.

Historical perspective of the wizard design:

Nowadays, wizards are mainly believed to be folklore; however, in the past, many people thought that they were real. There are some cultures where these conjurers were feared and assumed to be in league with the devil. In the past, there were some cultures in which wizards were respected and considered to be wise men who lived a hermit’s life but could be asked for advice and other assistance. All in all, wizards, if they truly did exist, probably lived in a place where they were using their powers in ways that benefited themselves the most.

Merlin has been part of legends for hundreds of years, and his name is virtually synonymous with wizardry. This character, who some consider as a real-life Druid magician, is popular for his role in Arthurian legends.

Sorceress Morgan Le Fey is one serious femme fatale due to the fact that she brought down a wizard and a king. Sometimes Morgan is portrayed as a crone, but most often, her image is that of a sexy she-devil.

Circe is the Greek goddess or sorceress who is best known for her appearance in Homer’s epic poem The Odyssey, where she proceeded to turn Ulysses’ crew into pigs and make him her love slave. This character is typically pictured as sultry and somewhat scantily clad.

Powerful wizard and friend to all Hobbits, Gandalf is probably the inspiration behind most of the wizard and sorcery tattoos created since the popular trilogy of movies began rolling out of the New Zealand forests. Gandalf tats often feature this wizard in action, riding his magical horse with his robes and long hair billowing in the wind.

If you think Harry Potter, the boy wizard is just for children, think again. Just as many adults have read this series of magical adventures, and that is what makes Harry just about the most popular wizard ever. If inking his face on your body doesn’t thrill you, you can take the low key route and just go with a lightning bolt tat.

Kindly Dumbledore is a character who brings light in the Harry Potter series, but his grandfatherly appearance sometimes belies his inner strength and incredible powers. Still, this wizard has his fandom, and his friendly mug can be found inked on more than one Potter fan.

If Dumbledore is the light, then definitely the dark one is the consummately evil Lord Voldemort. If you want a perfect tattoo, you can combine both wizards into a Yin Yang tattoo.

Tim the Enchanter and his impressive set of ram’s horns certainly carry some great artistic inspiration for wizard tattoos, especially for anyone who possesses a wry sense of humor. Even though he is not Merlin, but he does project a sort of queasy charm. 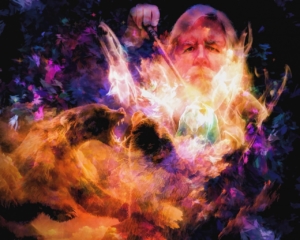 Wizard tattoos can be combined with all magical/mystical themes.

If you are someone who believes in magical powers or sorcery, try a wizard tattoo as it will reflect your belief in the supernatural. Wizard tattoo designs can come with the face of a wizard holding his magical wand. You can sport it anywhere on the body and flaunt it with style. The sizes vary from medium to large and appear as magical as the wizard. The wizard tattoos have become popular over the last few decades and are still a common choice. The reason for that is the fact that wizard tattoos are much more than the dark character, wisdom, and magic.