There are so many different animals in the world, so it is no surprise that there are thousands of animal tattoos that you can choose from. You can start with the traditional panther climbing up an arm or the butterfly on a shoulder to the endless possibilities. If you want to represent yourself through an animal, there are so many you can choose from. In times when we think about animal tattoos, we typically imagine a giant tiger on our back or a bear somewhere on the body. All of these animals portray characteristics of strength, power, and other features that we all either think we have or hope to acquire. These tattoos not only look good but also hold a lot of meanings and symbolism. But what about animals such as the hermit crab?

One of the fascinating animals is the hermit crab that always carries its home on its back. Once this crab outgrows the shell that it lives in, it moves on to the next one. These tiny crabs live a nomadic life. These kinds of animals can go wherever they want to carry their home at all times. Because there are a lot of meanings that can be attached to the hermit crab, very often, people choose it as a tattoo design.

Starting with some of the largest animals like the elephants to the smallest ones, insects, there is a lot of symbolism around us. When you think about something like a hermit crab, you probably think that there is only a little symbolism behind them, but you would be mistaken. This is also the case with this crab tattoo design. 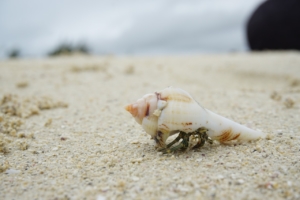 An additional way to look at the meaning of this tattoo design is by understanding the power that this creature has and how it occasionally chooses to stay away from danger instead of getting involved. Just like the claws of a bigger predator, the claws of the hermit crab can do some damage. However, most of the time, the hermit crab retreats into its shell to defend itself rather than to fight.

The only case when the hermit crab might decide to attack it when the attacking predator is smaller. This is why these tattoos can be a symbol of knowing when to fight. Just like in real life, you need to know when the time to stand up for yourself is, and when it is time, you need to decide to walk away from the battle. Not every situation is worth the struggle, and the hermit crab tattoo is a perfect way to represent this idea.

These animals can add to the idea of being a social butterfly because, unlike the name of the hermit crab, these creatures love to be with other hermit crabs. They are considered as highly social and represent communication and relationships in this way. On the other hand, the hermit crab will move back into its shell if it has had enough socializing for the day.

This is a type of tattoo that allows you to be creative. When you look at different hermit crab tattoo designs, you can see that there are a lot of possibilities of how you can design the shell. Very often, the hermit crab is designed in the traditional American style, and from there are so many variations of the shell.

One common theme is a skull as a shell of the hermit crab. This is one possibility of how you can make this cute little crab look a bit more dangerous and darker. The shell gives you some space to work with, so you are free to add some sort of message to be seen by all or just keep it looking like the normal hermit crab tattoo shell.

With its big claws, big shell on its back, and buggy eyes, the hermit crab is already somewhat of a cartoonish figure. This is the particular reason why very often people decide to get this tattoo in the new school style.

As you can see, there is a lot more behind this small creature that makes an outstanding tattoo. Even though it is not as attractive as other animal tattoos, this is a very unique and meaningful tattoo.