Archangel Michael – The leader of the archangels is one of the most important of the seven archangels whose name means he who is as God and is most often thought of like the angel of protection. He is the most powerful of all the angels. His holy warrior imagery was brought from Christian stories where he either contends with the devil or where he, together with his angels fights against a dragon which is a representation of the devil. 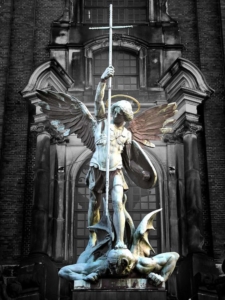 Archangel Michael is the leader within the angelic realm and a patron angel of righteousness, mercy, and justice. As such, the spiritual artwork depicts him as a warrior most usually carrying a sword, wearing armor, and in combat with or triumph over a dragon or Satan.

At the period of the early Christian church, this archangel came to be seen as the helper of the church’s actual armies against the heathens. Probably the most illustrated of the angels, of course, his angelic qualities are also emphasized with outspread wings and ray halos. His conquering of the foe is a powerful symbol of the triumph of good over evil, of right or wrong, as well as of our higher natures over out lower ones.

As he is the chief of all the archangels and brings forth protection, as well as courage and guidance, Archangel Michael is a popular tattoo subject. Usually, he is described as a tall, as well as a handsome and gentle figure that carries a sword that he uses to release people from the snare of fear. Archangel Michael’s main mission is to clean the earth and its inhabitants of the poison associated with fear.

Archangel Michael existed ever since the Garden of Eden, and it was actually he who guided Adam into farming, as well as caring for his family when Adam and Eve got banished. Michael is also a perfect manifestation of God’s mercy and was put in charge of nature – the rain, snow, wind, lightning, thunder, and clouds.