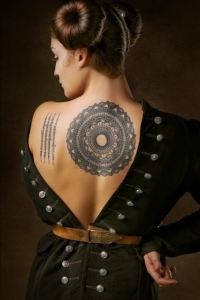 The rise of the celebrity tattoo

The area in life that has pushed tattoos more to the spotlight is celebrity gossip and news. For many years now, magazines, newspapers, and websites have been the place for displaying the latest celebrity tattoo and the gossip surrounding their significance.

For instance, in 2016, the media had a field day with Kendall Jenner’s lip tattoo. Either because of the unusual positioning of the art or the less than obvious meaning behind it, journalists filled many newspaper columns with Jenner’s tattoo.

Johnny Depp is another celebrity whose tattoos and their meanings have also been popular with the press. Though there is no secrecy behind the tattoo devoted to his mother, there has been a lot of gossip about the infamous Wino Forever inking. According to the stories, when Depp was dating fellow Edward Scissorhands star Winona Ryder, he had Winona Forever tattooed on him. After they ended their relationship, he altered the tattoo to its current state.

A lot of celebrities and about a million backpackers – it appears – have decided to get the traditional Cambodian and Thailand tattoos, perhaps with not all understanding what they are.

Sak Yant tattoos have become increasingly popular among those who traveled to Cambodia and Thailand, especially. Angelina Jolie is a celebrity who proudly wears a Sak Yant tattoo on her shoulder. She is responsible for many people getting a copycat of this particular tattoo. However, most tattoo shops in Thailand will not provide an authentic tattoo.

The etymology of Sak Yant comes from the words Sak (to tap) and Yant (from Sanskrit, meaning a geometrical design). The terms ‘to tap’ are taken from bamboo to tattoo instead of a machine. Tattoos of this kind are believed to have magical properties and can bring the wearer luck and protection.

In the newest movie called Nobody, certain characters wore card tattoos with great significance. For most of us, cards are used for playing games such as poker. If you visit Energy Casino or another online site will bring up blackjack and baccarat, but cards mean something entirely different for the characters in these movies.

Bob Odenkirk is playing the main character Hutch in this movie. He is a quiet and modest family man, but his tattoos tell a different story. There is one scene where it looks like he is in some danger, but one of the characters notices the wrist tattoo of two cards and immediately backs down.

The cards that Hutch has tattooed are the 7 and 2. Every single person who plays poker will know that these are possibly the last cards you want to see; thus, Hutch is the last man you want to pick a fight with.

Val Kilmer plays a character, John Smith, a man in prison for killing an intruder in self-defense. He explains the meaning behind the date tattoos on his arm in one scene. They range from the date he met his wife to the day she and their daughter were murdered. The last box is left empty for the day they are all reunited.

Harvey Keitel is another Hollywood name who was proud to wear his prison tattoos on-screen in the Grand Budapest Hotel movie. Artists deliberately drew the tattoos to look like they were made “inside,” but their meanings are left unclear.

In the newest movie Black Widow, The Red Guardian is shown in prison covered in tattoos. If you can understand Russian, you will see the names of his daughters on one arm.

Having a cobweb inked on the elbow is one real-life prison tattoo with a meaning behind it. This tattoo can suggest that the owner has spent a long time in prison. Because of this, it is not supposed to be used as a fashion statement. In the Paddy Considine movie Honour, his character reprimands a man he sees wearing this tattoo because he has never been in prison.

Lots of people decide to get tattoos of symbols or numbers that they believe bring them luck. For instance, if you search ‘slot machine tattoo’ on Google, many unexpected results will come back.

There are tons of images of slot machines tattooed on people’s skin, and most of them have the numbers 777 and coins incorporated. For the majority of people, the number 7 is a lucky number. Whether people chose these tattoos to bring luck or were inked after a big win is unclear. Still, having the seven and coins tattooed symbolizes fortune and luck.

As you can see, tattoos can have a different meaning in movies and real life. It is crucial that the tattoo you chose means something to you.