Home
Blog
Rihanna And Her Tattoo Designs With Their Meanings

Rihanna is one of the world’s most popular singers, and it is almost impossible not to be familiar with her or her work. Besides her unique voice, she is also famous for the numerous tattoos on her beautiful body. Rihanna’s tattoos show that the pop icon is a proud feminist who fights for the social cause. This singer, born in Barbados, has around a dozen tattoos on her body that she often proudly displays on the red carpet. However, it is often told that the singer might be hiding a few more tattoos that are only for her romantic partners. This post reveals some of her most popular tattoos and the 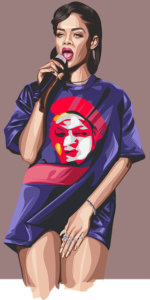 “Shhh” Tattoo on her Index Finger of Right Hand

Rihanna is known for her love for minimal but meaningful tattoo designs. This is why she owns several finger tattoos. There is one minimal ‘Shhh’ tattoo on her index finger that she tattooed in 2009. Rihanna got this tattoo after her breakup with singer Chris Brown. She handled the infamous incident beautifully as she kept silent on conspiracy theories. The Shh tattoo served as a reminder for the media that sometimes silence is louder than words.

You cannot fail to notice Rihanna’s tattoo of a falcon tattoo on her right foot. The inspiration for this tattoo design comes from the Egyptian pyramid paintings where the falcon was represented as the King in the sky. A Falcon can fly thousands of feet high in the sky and easily see its prey hundreds of meters away.

In the case of her tattoo, the falcon symbolizes how she has touched those heights of fame that other stars can only dream about. In a sense, she is the ruler of the sky. However, this means that she didn’t forget her roots, and it means that she keeps a close eye on her competition.

Rihanna owns the tattoo of King in the Sky (Falcon), so it is only understandable that she will own a tattoo of the queen of the ocean as well. Rihanna has a shark tattoo inked on her left ankle in a minimalistic size. This tattoo represents her strong personality.

XI.IV.LXXXVI on Her Shoulder Blade

Rihanna was delighted that she found a loyal and trustworthy friend in Melissa Forde. The duo made a strong and permanent friendship in the 90s. Unlike other superstars, Rihanna became a global pop sensation, but she didn’t forget her childhood friend. Their friendship is so strong that she even got her birthdate inked across her shoulder blade. Melissa also inked Rihanna’s birthdate on her body.

We have already confirmed that she is famous for her love for minimalistic tattoos. This is why she got the word Thug Life tattooed, showing her inclination towards the hood.

Even though Rihanna has claimed in several interviews that she is not a superstitious person, she still follows traditions because of her love for them. This is why she decided to have a zodiac tattoo on her body. Since Rihanna was born on Feb 20, that makes her a Piscean. In this honor, she has a Pisces Zodiac symbol tattoo behind her right ear.

Polynesian Tribal Design on Her Hand

Every person familiar with Rihanna and her work knows that she grew up in the island country of Barbados. This is the apparent reason why she is so attracted to the Polynesian culture. The Polynesian culture is unfinished without tribal tattoo patterns. Rihanna owns a Maori-inspired tattoo on her hand. Moreover, the tribal pattern on her hand has a cross too in it. The purpose of this tattoo design is to ward off evil spirits and bring good luck.

Rihanna always considers herself queen, and that’s why she owns the tattoo of Egyptian Queen Nefertiti on the left side of the ribcage. She is one of the most famous queens of the Egyptian era who brought religious revolution.

Sanskrit Prayer across Her Hip Bone

It is known that Vedas are one of the oldest manuscripts on religion and spirituality, and they are written in Sanskrit. This is why many pop singers love to have a Sanskrit tattoo on their bodies. Celebrities like Katy Perry, Adam Levine, Lady Gaga, and almost every other celebrity has a Sanskrit tattoo on their body. The thing that is hard to understand is the placement.

If you love tattoos, especially religious ones, you probably know that religious or sacred tattoos should not be placed on the lower part of the body. Rihanna owns a Sanskrit quote tattoo across her hip bone that reads “क्षमा सत्य महोपेक्षा शुचि निषेध नियन्त्रण.” Her tattoo is roughly translated to “Suppressor controls honesty deserves no forgiveness.”

One of the most painful choices for tattoos is Inner ear tattoos. You will seldom see any celebrity with inner ear tattoos. However, Rihanna liked the idea that much that she got an inner ear tattoo in 2006. In that period, she had just turned 18, and she was already an international superstar. She chose a Star tattoo design inside her ear in that honor.

Rihanna is in love with everything about the Middle East – the people, the culture, the traditions. Some of her favorite holiday destinations are Dubai and Sharjah. She was so much admiration for the Middle East that she even got herself tattooed with an Arabic quote. Her Arabic tattoo is inked across her ribcage and says “Al Hurria Al master,” which roughly means ‘Freedom in Messiah.’

Stars on Her back

If you are one of the number one fans of Rihanna, you should know that one of her most popular tattoo pieces is the star cluster on her neck that runs down the back. The popularity of these tattoos was so big that in the early 2010s, almost every other Rihanna fan got this tattoo design on different parts of their body. This tattoo design symbolizes the magical stardom that Rihanna enjoyed at a very young age. Her stars are in various sizes.

ISIS on Her Sternum

As already said, Rihanna is a huge fan of Egyptian mythology. This is why she has the tattoo of the Egyptian goddess Isis on her Sternum. Isis represents the goddess that helps the dead in the afterlife.

Because of Rihanna’s devotion to her Christian religion, she has a small cross tattoo design on her collar bone.

Rihanna also owns a tattoo of the word Rebelle Fleur inked on her neck. When translated, it means Rebel Flower. The tattoo represents that Rihanna likes to break the norms.

This Popstar is famous for sharing positive messages on her social accounts. Rihanna always tries to motivate her fans to have an optimistic look at life. She owns a tattoo on her shoulder blade that says, ‘Never a Failure, Always a Lesson. This tattoo clearly shows that Rihanna focuses more on trying and trying again rather than overanalyzing and overthinking everything in life.

Sugar Skull with Crossbones on Ankle

Another cool design that is easily noticed on Rihanna is the Sugar skull with a crossbones tattoo. This tattoo is placed on her left ankle. The inspiration behind this tattoo comes from the Mexican Day of the Dead parades. Typically, it signifies that one is not afraid of death but instead considers it a journey to the next life. It displays that there is beauty in death too.

The notorious Rihanna and Chris Brown incident made every fan hate Brown. Rihanna was a loyal partner in the relationship, and she even got the word ‘Love’ tattooed on her middle finger. She still owns this tattoo which shows that how she puts love over hate.

In the 2010s, Rihanna traveled the east, and it was during this time, she got attracted to the eastern culture. She admired the Tibet courtesy and got a tattoo in the Tibetan language. She decided to get the word LOVE written in Tibet on her hip.

The majority of the tattoos that Rihanna owns were done by 2010. Her pistol tattoo is one of the last tattoos that she got tattooed on her skin. A Gun tattoo signifies fierceness and strength. It also represents self-defense. Generally, the gun tattoo on Rihanna says that the singer doesn’t like to shoot first, but she won’t back down.

These tattoo designs are some of the most popular that the renowned pop star from Barbados, Rihanna, proudly wears on her body. You can see that each tattoo on Rihanna’s body is a true masterpiece full of meaning. Besides these tattoos, she also owns some hidden tattoos that even her fans don’t know about. If you consider yourself one of the most devoted fans of Rihanna, you are free to get one of her tattoos or use them as an inspiration for your next tattoo. You can do that even if you are not her fan but consider these tattoos as very artistic.