The Phoenix represents a mythical creature with a powerful message of hope and renewal, an homage to the cycle of life and death. Reference has been made to an animal that displays similar characteristics to that of the Phoenix in almost every culture on the globe. Even though the actual image of each creature may vary, they all carry with them the same symbolic meaning.

The traditional legend of the Phoenix originates from Greece and speaks to a bird that is unable to die. Every time this beautiful bird is destroyed by the flames, it emerges from the ashes, more reliable, faster, and more powerful than before.

This idea resonated with Early Christians. At a time when they were being persecuted for their faith, they sought comfort in the legend of the Phoenix, and soon, the bird was adopted as a Christian icon and became symbolic of The Resurrection of Jesus Christ.

The design in different cultures 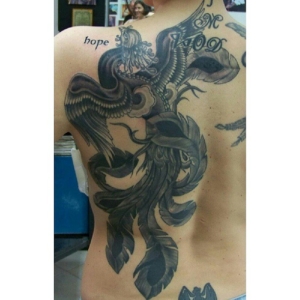 One of the most interesting facts about the Phoenix is that it is a recurring element in many different cultures and mythologies around the world. Although the specifics may differ from one culture to another, the concept of the immortal fire-bird keeps appearing through history.

The Meaning of Phoenix Tattoos

The image of this design incorporates a variety of traits, among them:

These designs are usually vibrant and lively, but it is not all about color and flare. When these designs are detailed, then the real beauty of the piece comes to the forefront. You are free to add as many elements as you desire to your Phoenix piece, but most artists suggest that it is best to keep it simple and let the image of the bird and its fiery tail feathers bear the weight of the design. When it comes to Phoenix designs, size matters; on the one hand, too small and the real value of your design will be lost (remember this is an intricate piece). On the other hand, there is no such thing as a tattoo that is too large.

There are times when the most powerful image is the one with the least amount of color. Even though pictures of the Phoenix are traditionally known to be vibrant and fiery, it is not uncommon to see tribal designs that lack any hint of color. These designs are usually created to focus on the intricate details of the Phoenix’s body and are meant to evoke more robust emotional responses and hint to deeper spiritual connections. Tribal Phoenix Tattoos stand for beauty, grace, power, perseverance, passion, and renewal. You can make a mix of mythologies by incorporating elements that are native to a particular region to show your spiritual link with that group of people.

Popularly known as Yin Yang Tattoos, these designs represent the dual nature of humankind. In Chinese culture, the Dragon is recognized as Yang, the powerful and passionate forces of the universe. The Dragon is usually the embodiment of masculinity, and like the Sun, it is untamable and wild (the white half). On the other side, Yin is the calm voice within us all. Yin, as represented by the Phoenix, is considered as steady and rational. In this tradition, the Phoenix is used to refer to the phases of the Moon and symbolizes femininity, beauty, and grace. These designs represent the need to find a balance between the opposing forces within ourselves.

In this design, the mighty bird grows out of utter chaos and destruction, having been refined by the torturous heat. It has a deep metaphoric meaning and speaks to your ability to withstand the harshest conditions and emerge a better, more reliable person. A Rising Phoenix Tattoo symbolically represents your robust nature and never gives up attitude towards life. This Phoenix is the emblem of a fiery survivor. A Rising Phoenix never dies; it is simply renewed by the circumstances that were designed to destroy it.