Home
Tattoo Meanings
Antlers Tattoos: What Are They And Their Symbolism

There are lots of symbols filled with meanings for people who are outdoor lovers. Symbols like trees, animals, and thousands more can be used to represent the outdoors and other characteristics connected to nature. The antler tattoos are perfect for hunters and those people interested in the symbolism attached to them. These tattoos hold a lot deeper symbolism, and because of that, they are not only chosen because of the interest that people have in these animals. To understand what the antlers stand for, you must know their origin. Elk, deer, and moose are some of the animals with antlers. However, the majority of people connect antlers with deer.

Antlers can only be found on the heads of animals, and they represent an extension of the skull. For instance, animals that belong to the deer family have antlers. Antlers are made of real bone and are typically found only on the male species. Every year, the animal with antlers on its head shed their rack and regrows them. The antlers are primarily used as weapons when fighting and to attract mates. 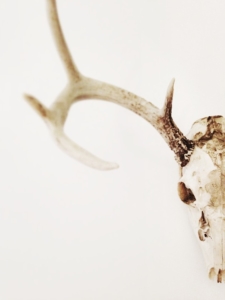 Since the majority of people associate antlers with the deer family, most of the antler’s tattoos include the deer’s antler in the design, and sometimes even the whole deer is included in the design. Even in history, during the time of hieroglyphics, deer with antlers have been scribbled onto cave walls and other materials. During that time, deer’s antlers were connected to male sexuality. During Roman times, they started using this symbol that was more closely tied to Artemis, the goddess of hunting.

Outside of the apparent meaning, the deer tattoo can represent fertility, purity, loyalty, power, and strength.

When you look at a large rack or set of antlers, they can make you get a little edgy. This is because they are huge, hard, and can kill you if a deer decides to run them into you. This animal has few natural predators and few that can endure a blow from his antlers.

The tattoo with deer’s antlers is a symbol of beauty and unique elegance. This tattoo is often chosen by people who are at peace with themselves and have a lot of love to give to others. Both men and women select this tattoo because it also symbolizes swiftness, fertility, regrowth, and humility.

When it comes to the meanings behind an antler tattoo, the idea of rebirth or regrowth is the most important. This tattoo is used to represent the idea of rebirth since every year, and the antlers are shed from the head of the deer and then grown back. In this sense, this tattoo can serve as a chance for us to start again or maybe to turn a new leaf. The antler tattoo can be used as a symbol of new beginnings, without making that meaning obvious and visible.

In another way, the deer is capable of searching for food and finding the green parts of life. As a result of this ability, there is another antler meaning which indicates positivity, profusion, spirituality, creativity, and watchfulness.

As previously mentioned, the antlers tattoo can represent your love for nature and the outdoors. This tattoo design is ideal for people who love walking around the woods looking for antlers or shed hunting. This is the reason why this image tattooed could stand for their love of nature and hunting.

This is a prevalent American fishing and firearms company for hunters. The logo of this company includes the outline of a deer with a big set of antlers, which is a symbol of their love for the brand, but not only that, and it symbolizes their passion for fishing and hunting.

Antlers with flowers tattooed are more closely connected to the fertility and regrowth symbolism previously mentioned. Very much as the flowers in season, they grow when the time is right, and they wither during the winter. In this sense, the antlers are shed, and then they regrow and stand for our regrowth as human beings.

There are other different reasons why people decide to get antler tattoos, just as there are so many different designs in which they get them. These are only some of the possible designs for you to choose from.  If you think that the antler tattoos are the thing you need, then you should research some more on this topic.