Black cat tattoo designs are usually misunderstood because they can truly have meanings from very positive to the very negative. So very often, it comes down to whom the owner of the tattoo is and what they want their black cat to represent.

Initially related to witchcraft and the occult, black cats have been viewed as an ominous symbol. Occasionally when people get their black cat tattoo designs, they wish for people to know that something is interesting below their surfaces, but they don’t essentially want to say what that thing is. It’s a great symbol of mystery and warning, which are meanings that you won’t get from many other animal tattoo designs.

According to superstition, black cats are marked as a mark of bad luck, an omen of disaster to come because of the belief that the black cat, as well as other small night-time creatures, was a familiar used by witches in their trickery. People who do feel like they have been bitten by the bad luck bug a lot in their lives might get the black cat tattoo to demonstrate it.

In recent times, cat images, despite their color, are more a symbol of respect of the feline rather than the mystical. The cat lover crowd has grown tremendously over the last decade or so, so a lot of people get their black cat tattoos with the only purpose of revealing their love for the animal. What’s great is that if you are a cat lover, you can use this meaning alongside any of the other ones.

Black cats are most commonly a symbol of the reclusive and introverted a spirited individual whose animated character is kept more enigmatic than that of others. This is a very explicit meaning meant for people who feel like they have a lot to present, but it is kept below the surface apart from those who they are closest to.

When an ominous black cat image is preferred, the feline is, in general, portrayed more realistically, allowing the deep eyes to highlight the mystery of the anonymous. In some cases, people like to leave the detail out of the body and fur and center all of the detail work in the eyes. This can have a very cool outcome, particularly on cat tattoos that have the cat’s head in them. 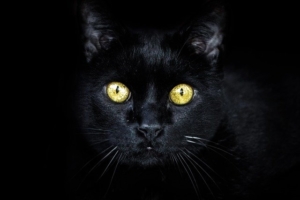 Very often, black or grayscale roses with extended stems and thorns are part of these tattoos, and that adds a factor of the occult to the image, as well as moon and star imagery that provides a representation of the dark of night. If you are a night owl type of person and that has become part of what you are, then the black cat tattoo might be the one for you. It shows that you work well at night and that you plan on staying a night person for the rest of your life. This is a risky meaning to use, though, since you might change your opinion in the future.
The black cat becomes a Halloween esque portrayal of the occult when designed with an arching back and raised hair, symbolizing terror and apprehension. When people this kind of tattoo meaning, they aren’t essentially saying that they should be feared. It typically means that they are not the type of people to mess with and expect to get away with it.

Designing the black cat in a cartoon-like style reduces the superstitious qualities of the feline and makes a lighthearted and more joyful image. In this way, the black cat tattoo can symbolize everything that you want it to. You can give it its meaning with the way you design its face; a happy face might show that you are a happy person, while a big-eyed cuter look might suggest that you have not lost your virtuousness.

A black cat silhouette is often designed as a very tiny but bold image and more open to interpretation. It creates a subtle look while still maintaining a strong symbol. This is a great design for people who desire to get a black cat tattoo without having to get a big, detailed design.

Of course, some people will get their black cat tattoo designs only to tribute a cat they currently have or that passed away. These tattoos are generally a bit more detailed than others because the owners want to have the design look precisely like their cats. These tattoos might include the cats’ names or dates of birth but are not obligatory.

If you want to create a more feminine design by adding fanciful elements like butterflies, floral patterns, or other miniature details is the way of achieving that. Butterflies add in some very cute meanings too, like change and attractiveness. Some people decide to put butterflies in the background, so the black cat is the central point of the design, while others will give both creatures the attention in the tattoos.

The cat designed in simple black lines together with another simple image highlights a similar symbol of obscurity without appearing so solid and bold. This is an additional way to use all of the black cat tattoo meanings without having to go all-out with the design. To some people, these simpler designs look better than the ones with lots of detail.

Black cats can also be used as an Egyptian symbol since they have a status as demi-gods. In this case, the cat is commonly portrayed sitting or lying with a straight back to portray royalty and adorned with gold jewelry like heavy collars and necklaces. These types of black cat tattoos do typically have a lot of detail as they are meant to look as correct as possible.