Mexico is a nation with a rich history and great traditions. Moreover, this country is rich with ancient lore, and stories passed down for generations. This national pride is why there are so many tattoos revolving around Mexico’s pride and history. Thanks to the rich and sometimes violent history, there are a plethora of Mexican symbols and images perfect for tattoos, as you can imagine. 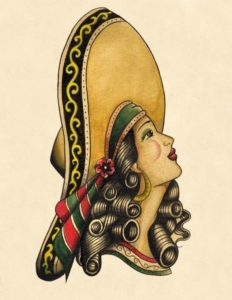 In Mexico, tattooing is an ancient and sacred practice. For centuries, early tribes of Mexico have been tattooing their bodies. During the Spanish invasion in 1519, the Spaniards described Mexico’s indigenous people (the Aztecs at the time). They were aggressive people that were “strange idol worshiping people who wear body art and practice human sacrifice.” It might have been unknown and strange to the Spaniards, but the Aztecs mesmerized people with a history worth celebrating.

The Spaniards are responsible for destroying the sense of the culture of the Aztecs. Tattooing was something most of the Aztecs partake in. However, the Spaniards erased it from their culture and history. The native population was unaware since the Spaniards burned most books and destroyed hieroglyphic writing, temples, sculptures, and native temples.

Tattooing was a crucial segment of their culture. In the National Anthropological Museum, clay figures are originating from the Olmec people. They allow us to identify the practicing of body adornments like head deformations and tattoo patterns. Much of these tattoos revolve around basic marks on the sides or around the mouth. Other figurines are part of the Yucatan Peninsula showing males with tattooed chins and cheeks.

The symbolism of these tattoos depends on the imagery and the variation of the tattoos. All of that serves to capture the pride of the traditions and culture of the Mexican people. Below are some examples of the most popular Mexican tattoos and what they symbolize.

The most significant symbol in Mexican culture and politics is the coat of arms of Mexico. This symbol includes a Mexican golden eagle eating a rattlesnake while sitting on a spiky pear cactus. This symbol carries powerful religious implications for the people of Tenochtitlan. However, it serves as a symbol of the conquest of good over evil for the European people. For most of them, the rattlesnake represents the snake in the biblical story of Adam and Eve. This symbol is also part of the Mexican flag.

In some designs, the official name of Mexico is combined with the symbol. Estado Unidos Mexicanos is put on the upper part of the crest in a semi-circular shape in these tattoos.

This tattoo symbolizes great pride in the heritage of those whose family originates in Mexico. This tattoo is a perfect representation of everything cultural in Mexico.

The sugar skull tattoo is another symbol that represents Mexican pride. This tattoo represents the Day of the Death. Because there was an abundance of sugar, people too poor to buy decorations use sugar to create their decorations. It symbolizes the soul of a dead loved one. The family writes the name of a loved one on the forehead of the sugar skull. They place it on a mantle, so when the spirit returns, they honor it.

It takes time to create a sugar skull. People decorate them with bright colors and smiles, making them great choices to be tattoos that represent Mexican heritage. You will often see this image included with other Mexican images that highlight the Mexican tattoo’s pride.

During this celebration, a lot of people put this kind of makeup on the face. This version has become popular in modern tattooing. Whether you get a black and grey or full color, this tattoo is the perfect option.

Aztec tattoos are creations of the Aztec people that are centuries old. Besides their unique look, the Aztec tattoos and symbols are often in line with beliefs, rituals, gods, and tribe’s traditions. Through the Aztec tattoo, you gain the same positive energies and protection the Aztecs got from having these tattooed on their bodies.

As you can see, the rich Mexican history and tradition are why there are so many Mexican tattoos. You should choose your favorite and find a way to make it personal for you. It is imperative to get a meaningful tattoo.