Freyr was a Norse god of peace and prosperity of the Vanir tribe. Many things were associated with him, like male virility, sunlight, and fair weather. Often portrayed with a huge phallus, Freyr was worshiped across Scandinavia (chiefly in Sweden), where he was celebrated at weddings and harvest feasts. Famous for his accessories, which included a magical ship, a golden boar, and sword that fought on its own, Freyr was fated to die in deadly combat during Ragnarök.

Alongside with his twin sister Freya, Freyr was one the most famous of Vanir deities. Brought to the Aesir as a captive at the conclusion of the Aesir-Vanir War, he earned a prominent position in the Norse pantheon thanks to his charisma and kindness. At the Norse temple in Uppsala, Sweden, Freyr held a leading role along with Thor and Odin. Along with Baldur, he was the most adored of all Norse gods.

His name comes from the Proto-Germanic word *frawan, which meant “lord” in the Norse language. This word was the masculine equivalent of “Freya,” meaning “lady,” just as Freyr was himself the equivalent of his twin sister.

Freyr was a man of various magical belongings. He commanded Skidbladnir, and a ship forged in the furnaces of Svartalfheim by the dwarf craftsmen Brokkr and Sindri. Skidbladnir was as fast as any ship and could be expediently folded up and carried in Freyr’s pocket.

Freyr also owned a sword that had the gift to fight on its own; the loss of this weapon would eventually contribute to his end during Ragnarök.

Freyr reigned over a realm of the light elves known as Alfheimr. Just like Freyr, the light elves were known for their peace and kindness. Freyr was also attended by the servants Byggvir and Beyla, a married couple, and by the messenger Skirnir.

Nearly as any other of the Norse gods, Freyr is part giant but in his case, on his mother’s side. He’s born as the son of the ice giantess, Skadi, and the god of the sea, Njord. He is also recognized as the twin brother of his equally gorgeous and renowned sister Freya. While his sister rules over much that Freyr does, but as well presides over death and war.

A number of accounts do not recognize Skadi as Freyr’s mother, but rather as the anonymous sister of Njord. In that case, Freyr’s mother would also be his aunt, but that sort of marriage was not at all unusual among the gods.

Freyr’s true love was a giantess known as Gerd “Gerðr.” It all started the day Freyr, secretly used Odin’s throne through which he could see out over all the nine worlds. While looking through it, Freyr saw a woman, and for him, that was the gorgeous woman he had ever seen and 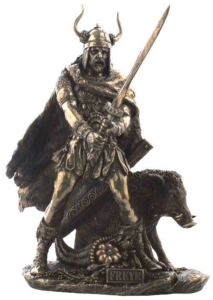 However, there was a problem since Gerd was the daughter of the giant named Gymir. Freyr had no clue how he was going to conquer the heart of Gerd. Due to that, he spent every second of the day obsessing with Gerd. The situation got so bad that Freyr would not even speak or eat, and he gradually started to get very ill. His father, Njord, got very worried and upset about the strange behavior of his son. He decided to send the servant named Skirnir to discover why he was so unreasonable. When he learned how in love his son was with this giantess named Gerd, he had to help Freyr. In order to do that, his servant Skirnir was ordered to go to the lands of the giants and bring Gerd so his son could marry her.

In order to protect himself before he left, Skirnir borrowed Freyr’s magical sword. When he arrived at the land of giants, Skirnir went to the house of Gerd and announced the marriage proposal from Freyr. He also took some apples of youth with him to give them to her if she accepted the marriage proposal, but when Gerd heard about the proposal, she got angry, and she instantly rejected the offer.  Skirnir then offered to give her a highly extraordinary and supernatural golden ring named Draupnir. He also promised that every ninth day eight new rings would drop out of Draupnir. The eight new rings were identical in quality like the Draupnir. Gerd was again not overwhelmed and rejected that offer. Skirnir then decided to change tactics and tried to threaten her. At first, she did not care about the threats because she had no intention of marrying Freyr. Skirnir then started to threaten to put curses on her by using the secrets of the runes. That scared Gerd into agreeing to marry Freyr, but she did have one demand. She demanded that Freyr had to wait nine days before they would be married. The nine days was Gerd’s way to make him suffer some more, and after the nine days were up, Gerd and Freyr got married.

In conclusion, this is a good and strong character and its good base for a meaningful tattoo design. If you found some attributes in this character, you can create a tattoo design with powerful symbolism.