What does the Padma mean?

The Padma comes from the Sanskrit language and is a word that stands for a lotus flower. This aquatic flowering plant has a significant symbolic role in yoga and many Indian religions, including Hinduism and Buddhism. It also goes under the name “sacred lotus.” 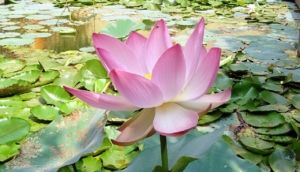 The Padma appears from out of the mud but blooms in flawless beauty above the surface of the water. This is why it often stands as a symbol of self-realization. This especially goes for those who overcome ignorance and suffering to find enlightenment and self-realization. It is also a symbol representing the purity of body, mind, and speech, as it rises above attachment and desire, liberated and full of bliss.

Padmasana, a yoga posture that is in use for meditation, also comes from the word Padma.

The Padma, the symbol, its uses in the mandala, and its significance

The Padma is the central symbol of people who are devoted to Buddhism. Out of Eight Auspicious Symbols, the Padma or the lotus is the one chosen. This is because the lotus grows in the mud but blossoms without getting tainted. In the same way, the person who has the power of ignorance can only reach enlightenment.

The Padma is also the symbol of enlightenment. This is because it is also the same as rising from darkness and shining into a beautiful flower. The process of enlightenment is very much like the lotus itself. If you take a close look at a flower, the petals’ arrangement is in concentric layers. Once the lotus starts to bloom, each petal opens in succession. This gradual blooming of petals has been used as a metaphor for how a human body can attain enlightenment.

The ‘PADME,’ which is part of the mantra ‘OM MANI PADME HUM,’ represents the lotus.

The Padma uses in Mandalas.

Those mandalas that have a meditation or some religious purpose use lotus in them. For instance:

The Kalacakra Mandala includes the Padma in the center of it. The petals are used around the concentric circles. There is a purpose for that central Padma. After crossing through different life paths, we finally reach the center to reach enlightenment.

Sri Yantra mandalas hang on the walls of the houses of those believing in Goddesses Laxmi. They think that she will fill their lives with wealth and prosperity.

This mandala has a Lotus-centric design with a huge flower in the center. This flower stands for Parameshwara initiation ceremonies.

Importance of the Padma

The Padma is also crucial as a position in Hatha yoga. The regular practice of padmasana helps the practitioner to reach the supreme level of consciousness.

In Buddhist symbolism, the lotus represents the purity of the body, speech, and mind.

Padma symbol as a Tattoo Design

As a tattoo design, the “Padma” inscribed in Hindi/Sanskrit gives a very peaceful and relaxed look. This symbol’s look is just like that of the lotus floating above the lake’s gloominess below it. Besides the scenery, it remains a thing of beauty. If you choose to get this tattoo, you can be confident that it is full of meaning. Just like any other tattoo with Sanskrit symbols, this is also a unique tattoo. If you want to get a Sanskrit tattoo, make sure that the Padma will work for you.