Myths are amazing stories, with a powerful and usually truthful message. These stories include images that show the mystical side of nature. They describe creatures with superpowers, such as fire-breathing or immortality. Mythological tattoos are an excellent artistic way to represent an idea which people usually find personally meaningful. Such mythological creatures include dragons, fairies, mermaids, unicorns, and a lot more. There are a lot of stories based on the myth with which we connect. In those stories, mythological creatures can stand for significant virtues or life lessons too. Mythological creatures bear a considerable connection to nature, and their fantastical elements can bring the magic back to reality. One mythical creature which finds its use in tattoo art is the Griffin.

What is the Griffin, and what are its characteristics? 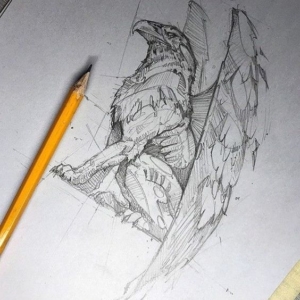 The Griffin, also called griffon, is a legendary mythical creature with the body, tail, and back legs of a lion. Also, it has the head and wings of an eagle, and it sometimes has the talons of an eagle as front feet.

As the lion is traditionally the king of the beasts, while the eagle is the king of the birds, during the Middle Ages, the Griffin was a particularly majestic and powerful creature. Since classical antiquity, griffins guarded priceless possessions and treasures.

In Roman and Greek texts, the Griffins found their associations with gold deposits of Central Asia. In the medieval heraldry, the Griffin became the symbol of divine power and the guardian of the divine in Christianity.

Throughout history, there were many tattoo examples of heraldic symbols among the members of European noble and royal families. Among the aristocracy of North America, Africa, Asia, and Oceania, there were symbols reserved for specific nobles marking ancestry too.

The Griffin is a fabulous mythical beast combining two of the most powerful animals, the lion, and the eagle. It has the hindquarters of a lion and the head and wings of an eagle. The ancient Greeks identified this creature as the guardian of various treasures.

As guardians, the griffins symbolized strength and vigilance, and also the obstacles one should overcome in reaching a goal. In ancient Persia, griffins frequently had their associations with Zoroastrianism, which is the religion of the state. Later on, Christians used this creature to symbolize the twofold nature of Christ, both divine and human.

Moreover, the Griffin is the symbol of the aristocracy because it is a blend of two animals, which are noble among cultures. As such, they are present on the coat of arms and family crests of European bloodlines that have a rich history. Romans associated this mythical creature with the sun god Apollo, giving it dominance and power. The Griffin is as fiery as the Sun, and that’s why people respected it and were afraid of it.

Griffin tattoo designs embody several meanings, most of which connect with the dominant and “alpha dog” persona of the creature.

With choosing this tattoo design, you can demonstrate your strength and determination. The Griffin is a timeless mythical creature in folklore and artwork. A fearless griffin as body art will establish your position as a leader. The eagle head of this creature denotes foresight and wisdom. Detailed eagle wings also complete the look and indicated your agility and power in accomplishing your goals.

With the refined appearance, the Griffin is ideal as a body art piece for only about any man or woman. The great thing about this design is that you cannot go wrong in using the image for body ink. Regardless of the details you choose for the design, you will never be wrong. With the instantly recognizable form, as well as classical association with divinity, this design gives you the ability to use body art to its full potential. This amazing tattoo shows the world that you are lion-hearted and stronger than others.

The meaning of this tattoo, in many respects, inherits the old notions of this amazing beast. As it is a hybrid of two living creatures, Griffin also symbolizes the dualism of human nature. Moreover, it is the symbol of the constant struggle of the beastly and the rational, the light, and the dark side. The positive meaning of this tattoo is fidelity, fearlessness, protection of the weak, as well as magnanimity. The negative meaning of the griffin tattoo is the desire for revenge and rancor.

Griffin tattoos are relatively uncommon, and they don’t change much when it comes to designs. Most of the tattoos play up the association of the creature with the sun god Apollo and have fire elements incorporated.