When thinking about a skull, the first thing that comes to mind is death and decay. However, there are some special and general meanings for different styles of skull tattoos. Sugar skull tattoo designs are a vital part of the Mexican and Latin American celebration of Dia de Muertos, also known as the Day of the Dead. This day which falls on the Day after Halloween. The skulls in this festival are a demonstration of ancestors and family that has passed on but has come back to Earth from the spiritual realm for the living to honor them. The sugar skull, or Calavera, is made from edible sugar and maybe eaten or serve as a decoration when made from clay. The decoration that normally adorns the sugar skull is multicolored and bright to symbolize the vibrancy of life, particularly appreciated by those who have lived a full one and have since passed away.

In the case of the tattoo, there are different designs of skulls that you can choose from. For instance, you can get a tattoo with a sugar skull- like the one used in the Day of the Dead celebrations; skull with roses– usually used to show the contrast between good and evil; or a girl skull- that is often designed with heart-shaped eyes or bows attached. The meaning behind a skull tattoo does not necessarily have to suggest something negative. Moreover, it can be used in remembrance of loved ones who have passed (very similar to the sugar skull is used in Mexico on the Day of the Dead).

Both in ancient and modern societies, skull tattoos symbolized great change and a celebration of life. The meaning can vary depending on the religious views of the owner. For instance, in Christianity, the skull can often represent eternity or what remains after the soul moves on, in Kabbalah, it can stand for rebirth and celebration. With sugar skulls, the symbol is always that of life and experience. Names and vibrant ribbons are often used to embellish the skulls. The name and date of death of a particular relative are used to serve as an Earthly symbol of that person for the Day of the Dead celebration. Tattoo designs often mimic this, particularly for those with Latin American or Mexican heritage and actively participate in this holiday.

This holiday is also celebrated in America for many reasons, and the major one is because of the large Mexican population in the States. Another reason for that is because there is no other day dedicated to the lost loved ones like in Hispanic cultures. On the other hand, many think it is because of people’s interest in magic.

The sugar skull tattoo or candy skull tattoo is a perfect way to honor dead loved ones through ink. There are different meanings behind this tattoo, and everything depends on the owner. As with most tattoos, the possibility to get innovative is what will make this tattoo your own.

In various cultures, the skull will stand for change or a celebration of life. There is a great deal of religious symbolism as well, and this could change the symbolism of the skull. However, in the case of sugar skulls, these are only happy moments to celebrate. Of course, we’re sad about lost loved ones, but these tattoos are a way to honor the ones we have lost.

Sugar skull tattoo designs usually include petal-like ornament around the eyes, which are occasionally rendered as heart shapes to highlight an animated quality. Dots and curving line work are also incorporated as well as plain flower shapes. If you wish for a more realistic design, then you should use realistic images of flowers, most often roses, but any flower can work as well. The favorite flower of the loved one or family member can be used if the tattoo is devoted to a particular person. In the eye sockets of the sugar skull, flowers can be placed or other lovely symbols like diamonds or jewels, Catholic symbols, or stars.

Geometric designs are perfect for a sugar skull since the complex and vivid decoration is easily fragmented into simple shapes. The sugar skull can be designed very plainly in this way and therefore be rendered many minors and more delicately creating a feminine appearance. 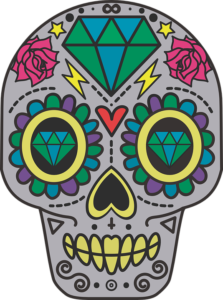 Roses and other flowers are frequently incorporated in the background to accomplish a fuller look and larger piece that is still kept simple.

In masculine designs, sugar skulls ornamentations are done on a female face rather than a skull to include the feminine form. This can be done very simply as well or very realistically. These designs are frequently made to appear threatening and include symbols of dreadfulness like spider webs, skulls, skeletons, and kept in the dark hues. These women can be designed like ghosts, ghouls, or zombies to deemphasize the festive nature of the sugar skull and highlight the death on which it relies. There are other cases when the female form is used with the sugar skull for artistic appeal rather than to make a specific statement. But no matter how it is used, the sugar skull is always a representation of death, taken either positively or negatively.

In the case when the female form is used, the woman is occasionally portrayed like a gypsy with detailed jewelry and a scarf covering the hair. The gypsy often has a crystal ball in her hands, and this serves as a representation of the future, which is mixed with the symbol of death and lives that have passed found in the sugar skull. These designs are frequently included within a vintage theme and can serve as an homage to a certain period, possibly one that a grandparent was born in.