We (Humans) are sharing the planet Earth with numerous living creatures. From fish deep in the blue oceans to pets napping on the carpet of our homes, every animal serves as a reminder of our connection to nature. Scientists have even found species that date back some 542 million years ago. When it comes to tattoo designs, it is easy to understand why animals are a popular choice among tattoo lovers. They are almost famous among every kind of person that loves tattoos.

There are actually many people who choose tigers, lions, birds, or frogs, among others and transform them into beautiful tattoos. Each of these tattoos come with their symbolism and meaning. Regardless of your choice, we are sure that you will enjoy every animal, as they are all very cute creatures. 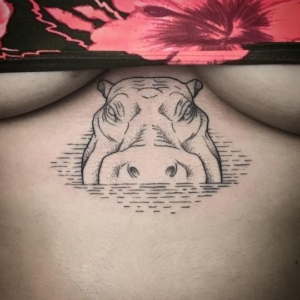 Wild creatures are among the most popular themes for tattooing from all the animals in the world. Usually, every wild animal represents a certain emotion, feeling, or capacity, making them favorite among tattoo lovers. Regardless of your sex, you can always get your favorite animal inked on your most beautiful body part.

One wild animal which is actually a common theme in tattoos is the hippopotamus or better known as a hippo.

The common hippopotamus, or simply hippo, is actually a large and mostly herbivorous mammal. It is native to sub-Saharan Africa, and it is one of only two extant species in the family Hippopotamidae. The second species is the pygmy hippopotamus. The name of this animal comes from the ancient Greek word for “river horse.”

After the rhinoceros and elephants, the common hippopotamus is the third-largest type of land mammal creatures. It is also the heaviest among the extant artiodactyls. Despite that they physically resemble the pigs and other ungulates, cetaceans are their closest living relatives. Cetaceans are actually whales, porpoises, dolphins, etc. They diverged from them about 55 million years ago.

We can recognize hippos after their barrel-shaped torsos, wide-opening mouths revealing large canine tusks, almost hairless bodies, and columnar legs. However, we best know and recognize them for their creatures’ large size. Adult hippos average 1,500kg, and 1,300kg, for males and females respectively. Despite the short legs and stocky shape, it has the capacity to run 30km/h over short distances.

Hippopotamus usually inhabits rivers, mangrove swamps, and lakes, where they form groups of five to thirty females and young. During the day, they remain cool, as they stay in the water or the mud. Reproduction, as well as childbirth, happens in water too. They emerge at dusk in order to feed on grasses. Although they rest near each other in the water, gazing is a solitary activity. There are not territorial on land. Hippos are also among the most dangerous animals in the world, because they are highly aggressive and unpredictable.

According to ancient Egyptians, this creature is the force of destruction, and a follower of Seth, the god of chaos. They haunted hippos from boats with harpoons. That’s why hippos can also symbolize childbirth and fertility, as of their great rounded belly.

Elsewhere in Africa, a folktale tells how God created hippos to cut the grass. Because of the heat, the hippopotamus asked if it could stay in the water during the day and cut grass during the night. Even though God feared of hippos eating the fish in the river, he agreed. However, the hippo was true to its word and only at the vegetation.

We know that a hippo female will do anything in order to protect her baby hippos. That’s why hippo tattoos can symbolize the protection of family and loved ones. The devotion of these animals to their families is huge. That’s why other meanings of the hippo tattoos would be motherhood and childbirth.

Here are some other symbolic meanings of the hippopotamus tattoos:

Despite symbolizing protection, fertility, and motherhood, the hippo is a creature that can also symbolize bravery. They also have healing powers. Sometimes, these animals may be considered a symbol of obesity.

Although the meaning of these tattoos is often positive, sometimes they can have a connection with darkness as well. Ancient Romans and Greeks brought hippos from Africa to participate in various gladiator games.

Hippo tattoos will definitely be an excellent way of celebrating your love for wildlife and nature. However, as this animal gained a negative image in Western culture, these tattoos are relatively uncommon nowadays. As many consider it the symbol of obesity, its true meaning and symbolism disappear.

But, there are many people who are still proud of wearing their hippo tattoos. Such tattoos are usually expressions of cartoon characters. Regardless of the fact if it is a baby hippo or Gloria from the Madagascar franchise, people get hippo tattoos. They usually do that as a nod to their comedic side.