Have you ever heard about Kokopelli? If you haven’t, it is a popular symbol that finds its associations with the Southwest. People took this symbol from petroglyphs of the Pueblo Indian regions of the southwestern United States.

Petroglyphs are the rock carvings, made by pecking directly on the rock surface. For this purpose, people were using stone chisels and hammerstones. When the desert varnishes on the surface of the rock chipped off, the lighter rock underneath has been exposed. In that way, it was creating the petroglyph. 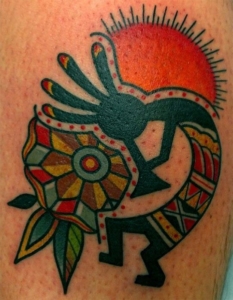 Another definition is that they are the images that people created by simply removing part of a rock surface by incising, picking, abrading, or carving, as a form of rock art. Outside North America, scholars usually utilize terms like engraving and carving, or other descriptions of the technique. They do so to refer to such images.

Petroglyphs also find their uses in tattoos, and one such is Kokopelli, which we mentioned in the beginning. Below, we will talk about Kokopelli, what it is and what does it symbolize in tattoos.

Kokopelli is a fertility deity, often depicted as a humpbacked flute player. Usually, Kokopelli has a feather or antenna-like protrusions on his head. Certain Native American cultures in the Southwestern U.S. venerated him. Like most of the fertility deities, he presides over both agriculture and childbirth. Moreover, he is the trickster god and represents the music’s spirit.

Among the Hopi people, Kokopelli carries unborn children on his back and distributes them to the women. Because of this, young girls often fear him. He usually takes part in rituals that relate to marriage. Sometimes, people depict Kokopelli himself with a consort, a woman that the Hopi call Kokolepmimi. According to sayings, you can see Kokopelli on the full and waning moon, much like the rabbit on the moon.

Kokopelli even presides over the game animals’ reproduction. Because of this, people usually depict him with animal companions like deer or rams. Other common creatures that find their association with him are sun-bathing animals like snakes. Water-loving animals also have a connection with him, and they can be insects and lizards.

In the domain over agriculture, the flute-playing of Kokopelli chases away the winter, bringing spring. A lot of tribes, like the Zuni, associate him with the rains. He commonly appears with Paiyatamu, who is another flutist, in depictions of maize-grinding ceremonies. According to some tribes, he carries babies and seeds on his back.

Nowadays, Kokopelli tattoos have huge popularity. They are the ways in which people express their Southwestern identity or interest in the Native American tribal cultures.

Kokopelli is a popular symbol that the people of the Pueblo Indian regions took from petroglyphs. The hunchbacked flute player is usually in a dance pose, playing the flute and holding it with two bent stick-figure arms. Different groups that used his image in everything, from rock art to ceremonial room walls, know him by different names. He is even present on pottery.

His meaning, as well as his character in the different groups, also varies. However, almost universally, he is the symbol of fertility and a harbinger of good. As befits a symbol of fertility, sometimes artists show him with male genitalia of exaggerated size.

Usually, Kokopelli tattoos can be the symbol of renewal, of a new phase in the life of the wearer of the tattoo. As it is the Native American symbol, there are numerous stories that encompass Kokopelli. However, most are up for interpretation, and they vary based on the region. Kokopelli is actually the bearer of agriculture and fertility. However, it is also a trickster god and a bit mischievous.

Kokopelli is the symbol of fertility and renewal on various levels going from childbirth to seasons and crops. He turns winter into spring and has the responsibility for babies being born.

The first images of Kokopelli appeared somewhere between 750 AD and 850 AD. They were present on pottery of the Hohokam, one of the first inhabitants of Southern Arizona.

Combining the images of Kokopelli with other elements in tattoos is quite common. Some of the most common design combinations are the sun, animals like deer or rams, music notes, or tribal tattoo patterns as well.

Trying to design your own Kokopelli tattoo will be a process that you will find highly personal. While there are people who think that dark colors are suitable for this image, others prefer it when it is done in bright colors. Regardless of the colors that you are going to choose, you may have a bit of freedom with the actual artwork which you will choose for the basis of the tattoo.

While artists traditionally depict Kokopelli bent overplaying the flute, a lot of designs feature him standing. Here, he has the flute pointed towards the sky. This is just a matter of preference, and it depends on the person that will wear the tattoo. In order to fit your personality, you can feel free to customize your Kokopelli tattoo as you would like to.