Home
Blog
The Striga: Slavic Mythology In The Tattoo Culture

The Striga comes across many different regions and in many forms. The legends differ from place to place, and it is challenging to set facts from fantasy. In some areas, it could be interpreted as an allegation of witchcraft somebody might even shout “Striga!” as some curse word. Before researching the stories, let us discuss the different roots and symbolism of this monster’s name. By doing this, we can better understand this creature’s true nature and essence.

The Striga in different cultures

In French mythology, The stryge is a bird-woman who sucks children’s blood.

In Greek culture, a Strix is a shape-shifted bird of ill omen that fed on the blood of humans. Strix could also submit to witchcraft.

The shtriga in Albanian culture is a vampire witch that sucks the blood of infants. This vampire can transform into a flying insect.

In Slavic mythology, The strzyga is a vampiric female demon that can transform into an owl to hunt humans at night.

Many vampire myths can be traced back to the striga, an expression that illustrates a host of Slavic monsters whose souls have been possessed by black magic. The term comes from the (Latin) word Strix, which means’ owl,’ but is commonly used to describe winged indications of death.

Some characteristics are common amongst the different types of Striga: they drink blood and are able to survive on that of some large animals but prefer humans’ as it keeps them satisfied for longer. They were once humans themselves. They are distorted by black magic or the desire for revenge after death. As such, many still have characteristics of humanity, like the ability to communicate, the remembrance of their human memories, and (far more rarely) empathy for humankind, their usual prey.

Of the Striga themselves, there are three primary principle varieties. The most known is the strigoaică, a human female who has sold her soul to the Devil. The black magic transforms her body into a monstrous form, extending her face into a wolf-like shape, sharpening her knife-like teeth, and bending her body so that she must wander around on all fours. She abandons civilization, wandering in the woods to prey upon lost travelers; she entices them from their paths by imitating a crying child. At night, she sneaks in through the windows of nurseries to suck the blood of babies. This encouraged many parents to leave a toy cradle in the room. This Toy (doll) had a single silver nail driven into its head that would kill the Striga who swallowed it.

Another variety is the strigoi viu. These are wizards who have grown too powerful, thereby warping their human bodies. Unlike the strigoaică, they can appear human for short time intervals. This made them exceptionally stealthy predators when the time came. However, they seem to preserve more of their humanity than their witch cousins. They rarely hunt human prey; instead, they prefer livestock, which creates a more significant economic problem. It is possible to satisfy them with an offering of milk and wheat, but their presence dries farmland and crops, so it is not wise to do so.

The most dangerous Striga is, the Dead Striga or strigoi mort. This undead creature possessed both superhuman power and speed. The strigoi mort surges from the fresh graves. They go back to their families and act as though they had never died. This striga feeds off of their life force, causing them to weaken and die. The corpse of a person unjustly dead (murdered, starved, or driven to suicide) would become a strigoi mort to look for revenge upon those it held responsible for its death, after which it would take up residence in old buildings or crumbling ruins. It was necessary to take appropriate precautions before burial to ensure that the corpse did not rise from the grave. A silver stake driven through the heart, decapitation, or a clove of garlic under the tongue were all believed to be effective measures. 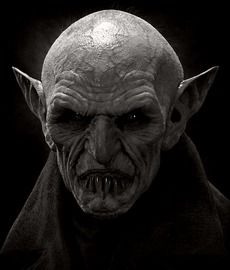 No striga monster is more popular or universally recognizable than the vampire, but few know its true roots.

Having these examples in mind, we can conclude some properties of strigoi that are most likely the truth and not a myth. A striga is an undead being. Almost every story talks about the beast rising from the grave. It is well known that some undead creatures crave the warm blood of the living. Their cravings for living humans mark them clearly as some vampires. Despite some reference to a male creature, it is most likely that most Striga is females. This comes with a solid connection to witchcraft historically connected with females. The strigoi can change their form or shape and often take the form of a flying creature (bat, owl, moth, fly, or bee) to hunt and kill their prey.

The last but not the least thing to consider is the existence of a curse. A strong curse would explain how a striga arises from the grave and why it is hunting only at night. In some stories, the Striga is told to only hunt during a full moon. This concludes with the more well-known lycanthropy curse.

When a “striga person” died, removing and burying the head separate from the rest of the body was standard practice to prevent the striga from rising from the dead. Burying the body with the face down and a sickle around its head was also believed to work. Other techniques of protection from the striga (and vampires) included:

Although Slavic mythology and folklore goes wildly underappreciated as a whole, its influence on supernatural culture has been intense, forever changing the scope of horror literature, movies, and art. Striga tattoos are not some of the most used in the tattoo culture. That may be because they hold special meaning and symbolism, and most people have problems connecting with this motif. These designs carry strong symbolism and can be incorporated as a piece for themselves or as a part of a more significant tattoo project.

Vecna: The Ultimate Villain From Board Games To The Tv Shows

The Whispered One, known as Vecna the Undying