We have already talked about several tattoos of Zodiac signs and their meanings in the tattooing world. Here, we are going to talk about the Scorpio tattoo.

Just like with all animal tattoos, a tattoo of the scorpion represents the traits and the characteristics of the scorpion. Someone who gets this tattoo might want to send the message that they are stealthy, deadly, and not to be messed with. 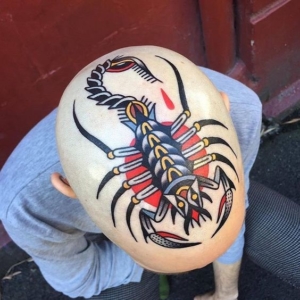 Additionally, to representing the traits of the scorpion, this tattoo could be the symbol of different other meanings, like the Zodiac sign Scorpio.

Below, we are going to talk about the characteristics of the sign of Scorpio and its use in the world of tattoos. We will also mention the most common meanings and symbolism related to this sign of the Zodiac.

Under this sidereal sign of the Zodiac, the sun is in it somewhere from the 16th of November to the 15th of December. Depending on the Zodiac system that you use, if you are born under the influence of this sign, you may be called a Scorpio or a Scorpion.

Scorpio also finds its association with three different animals: the scorpion, the eagle, and the snake. The snake and the eagle are connected to the nearby constellations of Aquila and Ophiuchus. Scorpio finds its association with the Greek deity Artemis too. It was said that he is the creator of the constellation Scorpius. The colors of Scorpio are deep red, brown, maroon, and black.

The people who are born under this sign are assertive and passionate. They are also determined and decisive. They will research until they finally find out the truth. Scorpio is an excellent leader, always aware of the situation, and the features prominently in resourcefulness. As we said, Scorpio is a water sign and lives to express and experience emotions. Even though emotions are quite significant for Scorpios, they manifest them in a different way than the other water signs. In any case, they always keep other people’s secrets, whatever they may be.

We already mentioned that Scorpio is the eighth sign of the Zodiac, with the plant Mars as ruler. Pictorially, the sign is shown as a scorpion. As with other arrow symbols, this sign finds its association with the masculine and dynamism.

For instance, in Egypt, a Scorpion symbol was believed to offset the venom of the insect, so it represented resurrection and healing. Those people who are born under the influence of this astrological period have positive, as well as negative traits. These traits are usually related to strong emotions, such as persistence to the point of discernment and stubbornness, which may turn to jealousy too.

While the scorpion is maybe best known as a fearsome insect, it also possesses connections to a lot of ancient religions and cultures. Scorpions are quite common in tattoos, so getting this creature inked on your body is going to make sure that you have chosen a unique design.

Of course, there are a few different meanings that tattoos of Scorpio or the insect itself can encompass. You are definitely going to have the ability to design a tattoo that is unique to your personality.

Generally said, this tattoo may represent some of the following things:

If your Zodiac sign is Scorpio, there are many ways in which you can design your scorpion tattoo. You can do this to make sure that the Zodiac symbolism comes across. One way would be getting the constellation itself. This series of stars may be on a midnight blue or also black night sky background. They can also simply be on their own.

One impressive design that would also look great is getting a large sky-scape tattooed on your back or some other parts of your body, with the stars making up the Scorpio constellation. This is going to be an excellent choice for a Scorpio that is an astronomy lover. It can also be great for a Scorpio that appreciates the night sky’s beauty.

Scorpio tattoos are an excellent choice for those people who belong to this sign. You can tattoo the constellation, the symbol, or also the scorpion itself. The choice is yours. And, remember that your tattoo will symbolize whatever you want it to, regardless of its countless other meanings.