Home
Tattoo Meanings
The Most Frequent Witchcraft Symbols And Sings, And Their Meaning

Nowadays, witchcraft becomes more and more popular. And, this makes sense – it is an excellent way of connecting with yourself, with nature, as well as with other people. People of all genders, as well as walks of life, are turning to this ancient practice and belief. In order to celebrate it, we are going to present you with a list of some of the most common symbols, as well as signs of witchcraft and what they mean. 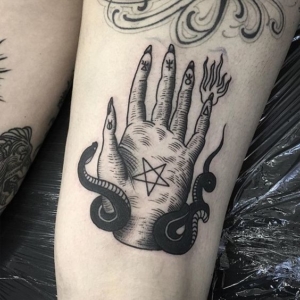 So, we are going to start with the basics – the elements. The five elements are fire, water, air, earth, as well as spirit. Each of the elements and signs is unique and is also crucial in rituals, and they are represented by a runic symbol.

Triangle is the runic symbol for fire. It represents masculine energy, transformation, as well as destruction. It is a symbol that is frequently utilized when practicing some rituals meant for purifying or starting something completely new.

The upside-down triangle is the runic symbol for water. It represents feminine energy, emotions, intuition, as well as healing. Usually, the symbol is utilized when practicing some rituals for emotions, love, and also for washing away some negative energy from life.

A triangle with a line through it is the runic symbol for air. It represents the mind and mental activity, and also wisdom, life, as well as communication. It is usually utilized signs in rituals related to wisdom.

An upside-down triangle with a line through it is the runic symbol for earth. It is an element that is connected to the divine feminine, as well as motherhood and the entire world around us. It also represents prosperity, and it is frequently utilized in some rituals for money and fertility too.

The pentagram is the most easily recognized symbol, but it is often the most misunderstood too. The pentagram is a five-pointed star that represents the five elements that we already mentioned. When it is right-side up, the elements spirit is at the top. However, when the star is upside down, it represents the spirit becoming grounded, as well as in touch with the earth.

Witches wear the symbol of pentagram for protection against negativity, as well as evil, and also as a sign of their beliefs. Recently, it was adopted by Satanists, but it is not an evil symbol at all.

A perfectly circle is the symbol of the ritual circle. Most of the time, it is seen with a pentagram inside of it. To perform any ritual, the circle has to be opened and closed. It also represents completion, cycles, as well as protection.

This is a runic symbol that is represented as a circle topped with a crescent moon-shaped horn. In Wicca, there are two basic deities that are worshiped. The Honored God also represents masculine energy, and it is utilized in rituals for fertility.

This is another symbol of witchcraft, represented by three moons, two crescents with a full moon in the center. It represents the goddess deity that the Wiccans worship and invoke, as well as the feminine divine. The symbol also represents the moon and phases of the life cycle of a woman – maiden, mother, and crone.

This crescent moon represents the goddess and the divine feminine. Often, it is also connected with the feminine menstrual cycle, creativity, growth, as well as new beginnings too.

This is a symbol of a wheel at the center of a six-sided spiral and a circle. It represents Hecate, who is the Greek goddess of witchcraft, necromancy, magic, as well as the moon. It is often utilized in rituals to invoke transformation, as well as change.

This is a dagger that is regularly featured in a lot of rituals, as well as ceremonies. It is the representation of the removal of what people want to leave behind and kill the old or undesired. It is most commonly connected with the elements of fire and air.

This symbol is borrowed from the Egyptians, and it is incredibly recognizable. It is a traditional cross with an oval-shaped handle on top. It is the representation of eternal life and protection too. And, as it is connected to the goddess Isis, it is also a representation of the divine feminine.