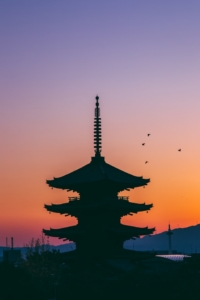 Set in the Song dynasty, this Chinese novel tells a story of a group of 108 outlaws, something like the merry men of Sherwood Forest. The book does not have one lead and a protagonist character, but it’s a collection of several stories that focus on various characters.

This novel is responsible for launching the massive popularity of Ukiyo-e art translated as “pictures of the floating world,” depicting the cities pleasure districts during the Edo period. A combination of two words – uki for sadness and yo for life, the word ukiyo-e reflected the Buddhist way of life as an illusion, painting the cycle of birth, suffering, death, and rebirth.
This kind of art produced the most famous Japanese tattoos that last to this day, and the link between the tattoo world and this novel is the fact that all of the heroes from the stories are heavily tattooed as it follows:

One of the stories in the novel is about a soldier that committed a crime that was sentenced with a death penalty but managed to avoid it by becoming a monk in a temple on the famous Five-crested Mountain, where he was given the name Kaoshô Rochishin. He was recognized for his behavior and violent temper with the strength that cannot be contained.

His figure throughout the story is described as massive and muscular, his torso covered with cherry blossom tattoos, for which he became famous among the Suikoden as ‘The Tattooed Monk’.

Detailed and very complicated tattooing from neck to knee is still popular among Japanese gangsters today, and these tattoos are considered as proof of courage due to the overwhelming pain that one must endure.

As the new style of decorative tattoos developed, criminals began disguising their penal tattoos with larger, more elaborate designs, and this transformation of tattoos is thought to be where the connection originated between organized crime and tattoos.
These full-body tattoos are also known as horimono, and it usually covers the body from elbows, all the way to the full-back and the knees. This way, they could be easily covered since they were prohibited in that period. They distinguished only outlaws since it was a punishment that marked them as criminals so that everybody can see that they have committed a crime.
The center masterpiece of this kind of tattoo is placed on the backspace; it usually is a warrior from the novel, most often Kaosho Rochishin – The Flower Priest, representing the life of a warrior, his strength and determination.

After the traditional black and white – Irezumi – tattooing, the Edo period was the time when the momentum for the development of the art progression of the woodblock prints happened. Notably, all the heroes are heavily decorated with Irezumi. Wearing Irezumi is an “Aspiration” to life’s goals.
These tattoos became colorful and nowadays include many other elements that have different meanings but complete the whole picture and the story. They decorate the body with mythical beasts, flowers, leaves, and other images from stories, myths, and tales.

We can easily say that this is not an ordinary tattoo design. In spite of that, this is still design with great history and symbolism. Maybe it’s not going to be the client’s first choice but has its value and meaning like the “usual” motifs (koi fish, samurai, geisha, etc.) in the tattoo artists around the globe.