Lately, you’re seeing unusual tattoos everywhere, and on everyone, you are not hallucinating. You could not even move without seeing a tattooed person. Nowadays, it is also common for people to share tattoo themes. Whether they are nautical-themed tattoos, or also tribal ones, there are some images a lot of us strongly relate to. Why a lot of people tend to go toward the same themes? It is probably as they are all built the same. Every one of us loves, laughs, hurts, and experiences the same emotions, although we tend to get different roads in order to get there.

And, while we are sharing experiences, every one of us expresses their experiences in a completely unique way sometimes through unusual tattoos. Regardless of our reason for getting a tattoo, it is always good to know more about the meanings which stand behind great symbols of this time and past times too. With that, we can be inspired to put a unique spin on our design.

Here, we will present you eight unusual tattoos, which have their interesting meanings and symbolism:

Swallows, one of blue and one of red, one with a halo, and one with horns, were a time-honored, as well as popular motif in tattoo art. Usually, they are in combination with words such as hate, and love, faith and lust, or bitter and sweet.

Often appearing as two separate tattoos, the bird images are evidently interpreted as one, even when the two swallows appear on separate arms or legs. When people choose this tattoo design, they are hearkening back to an earlier era of tattooing, and even touching upon the union of opposites. This union acknowledges that all of life is actually composed of two sides, regardless of the particulars of the subject.

Long-bearded, robed, as well as carrying a scythe, Father Time is ushered out with the end of each new year, and replaced by a baby. He is probably the symbol of a descendant of the god Saturn who the Greeks called Chronos, which means “time.” 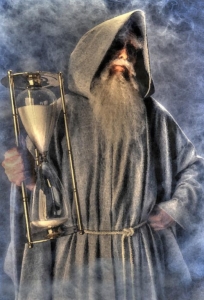 Father Time carried the scythe or sickle, not as the grim reaper might, in order to harvest human souls, but instead to honor the farmers, because he was the god of agriculture too. Nowadays, Father Time actually personifies the knowledge that every one of us is subject to the same inescapable laws of Mother Nature.

The sign of the fig is the symbolic gesture that wards off the evil eye and offers protection against malevolent spirits or also forces. You can create it by making a fist with your thumb protecting between the index and middle fingers. This is considered an obscene gesture of contempt, and it symbolizes sexual intercourse.

It is still not clear why this sign is symbolic of protection. However, this can have a connection with the notion of sexless and spirits and frightened of any allusions to it. In a lot of religions, a red coral amulet depicting the sign of fig is quite popular even nowadays on necklaces and watch chains.

A lot of groups use the fist as the symbol of power and antagonism. The black power salute represented a fist that African Americans used as the gesture of solidarity and pride. Ironically, it is present among white supremacists, as well as Aryan groups, as a symbol of hate.

Flags definitely represent a part of the repertoire of tattoo imagery, regardless of the fact if they are patriotic or nationalistic. They could also be maritime signals, or also emblems of particular special groups. The uses of flags throughout history were primarily strategic – visual aids, which made it much easier to observe certain groups at a distance. As time passed, they became unusual tattoos and symbols with which people were able to identify. This is also their role in tattoo art.

Even though the hollow-center grenade, represented by an open circle, and topped by the group of seven flames, symbolizes the famous French Foreign Legion. The tattoos in which legionnaires wear may be more campaign-specific, as well as a memorial in nature.

For instance, the tattoo commemorating Operation Epervier, or Sparrowhawk, which came as an initiation in 1986 in Chad, includes familiar unusual tattoos and art themes of the sword in a fist and the wing of a hawk, which is the bird of prey, combined for its specific meaning and effect.

A tattoo that contains the word “FORGIVEN” can seem easy to read, as well as understand. However, it can symbolize the larger belief system of Christianity, whose central belief, as Jesus Christ articulated, in the New Testament Book of Matthew is: “This is my blood of the covenant, which is poured out for many for the forgiveness of sins.”

This numeral, written 420 or 4:20, is the allusion to marijuana. Even though legends say that this number refers to a Californian Criminal Code, there is actually no such code. Instead, it probably originates from 4:20 p.m. – the time of the day, which is about getting together and smoking pot amongst the high school students in San Rafael, California, in the early 1970s.