Many people in the world adore tattoos. Tattoo lovers love tattoos not just for their specific, interesting, and mystical tattoo designs, but also for their symbolism and meaning. However, there are also those who don’t have such a good opinion about tattoos and don’t like them at all. But, those are rare people, believe us.

There are numerous tattoo designs, and they vary in shape, size, color when it comes to their physical appearance. However, for 90% of tattoo lovers, spiritual meaning and symbolism are much more important.

Just like other social or cultural art forms, tattooing experiences periods where one style is more popular than any other. Some tattoos are famous among tattoo lovers, and they are mostly tattoos of skulls, flowers, animals, etc. Tattoos are not only in close relation with art but with religion too. That’s why there are many tattoo designs that have religious origins, and which are quite common among people.

However, regardless of the tattoo and the motifs for it, you always have to research its meaning and symbolism. But, if the meaning or the symbolism is not important for you, but you simply find the tattoo design beautiful and attractive, that’s fine.

Here, we will present you several tattoos which aren’t abundant in meaning, but have their place in tattoo art: 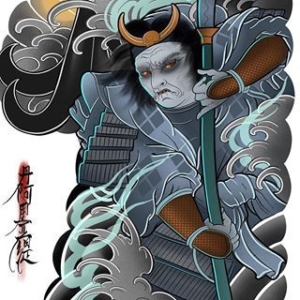 Instead of suffering defeat in a battle at sea, he committed suicide by jumping overboard in full armor. He also took with him the royal entourage, and his vassals followed him. His ghost and the ones of his legions rise in storms at sea. They do so to exact revenge upon the rival clan, which defeated him, according to legends.

Tattoos of Indians, the indigenous people of the New World, mostly focus on bust designs of different Plains Indians groups. They are most notable for their feather headdresses. These tattoos represent the romanticized attempts to depict Indians’ heroic and tragic struggle to maintain their cultures and to survive.

They are usually poignant and patriotic symbols. It is ironic that these indigenous peoples didn’t use portraiture in their tattoo art. Rather than that, their images find their uses into an Americana, where they never wanted to participate.

Hagomoro is a beautiful goddess of one Japanese myth, and sometimes subject to Japanese tattoo art. The story about the mortal that stole the angel’s cloak, preventing her from returning to heaven, is famous worldwide. It is the story of an angel or nymph who flies down to earth, arousing the love of a mortal. That’s what makes the story famous.

In the case of Hagamoro, she visits a poor farmer and ends up granting him everlasting abundance. He takes pity on her and returns her sheer veil, covered with stars, after seeing her weep. That’s why she made the decision to stop her suffering.

The theme of the beheading of John the Baptist is one that finds its uses widely in Christian art. Despite in Christian art, it is also common in Coptic tattoo art. These types of tattoo art designs find their uses in pilgrimage images in Jerusalem, particularly in the earlier part of this century. The story is one of desire and spite.

Salome was the stepdaughter of Herod, who imprisoned John the Baptist because he had the courage to criticize his marriage. When the dance of Salome delighted Herod, he promised her anything. As her mother prompted her, she asked for the head of John the Baptist, and she received it.

The Byzantine artists used this cross for the first time. The bar above the main crossing member represents the abbreviated inscription, which the Roman governor Pilate placed. The inscription reads INRI, meaning Iesus Nazarenus Rex Iudaeorum, which is Latin for Jesus of Nazareth, King of the Jews.

The origin of the small diagonal beam at the bottom is lost to time. However, several explanations are present:

The last one is probably the most logical explanation.

The hammerhead sharks are a particular species of shark which finds its popularity in tattoo art. Like the great white shark, the hammerhead shark attacks humans without provocation. With its gray-brown coloring on top and off-white underside, the head of this species is the most striking thing.

With its shape and form, it is close to letter T with the eyes set at the ends. The largest, as well as the most dangerous type of hammerhead shark, usually reach a length of about 15 feet.