Steampunk is the same time retro and futuristic subgenre of science fiction that uses designs inspired by 19th-century industrial machinery. Although its fundamental origins are sometimes connected with the cyberpunk genre, steampunk artistic works are often set in an alternative history of the 19th-century British Victorian era or the North American “Wild West.” In the future, when steam power has maintained regular usage, or in a fantasy world that similarly employs steam power.

Steampunk as an artistic style is genuinely one-of-a-kind. The genre combines the aesthetics and technology of the 19th century with elements of science fiction. Its literary and audiovisual works occur in an alternate reality where technological progress is based not on electricity but on the steam engine.

Steampunk, a World of Steam In the Tattoo Culture

Steam is a central part of Steampunk. The technology featured in this realm is generally just as advanced as our modern society, but it uses steam as its main energy source instead of gas, electricity, or oil. Because of this, steampunk technology takes on a retro look similar to the Industrial Revolution era.

Douglas Fetherling said, “Steampunk is a genre that imagines how different the past might have been had the future come earlier.”

The steampunk artistic approach is inspired by the fashions of the Victorian Era in England (1837-1901), Belle Epoque in France (1871-1914), and the Civil War era in the United States (1861-1865). The outfits from these eras are often modernized by adding mechanical parts with gears showing.

The rules of steampunk fashion: Men, long coats, and top hats. Women, corsets, and steampunk eyewear are recurring elements. Wearing a steampunk pocket watch is excellent for both men and women.

Origins Of The Punk Part

To know how “punk” fits into Steampunk, we’ll need to go back to the genre’s origins. The phrase “steampunk” first appeared in 1987 in a letter sent to Locus Magazine by American writer Kevin Jeter. The author jokingly used Steampunk to describe the Victorian fiction he was writing with his acolytes Tim Powers and James Blaylock. The term “punk” was a parodic hint to “cyberpunk” because the ideology of punk is much less conspicuous in Steampunk than in cyberpunk.

Today Steampunk has grown from a joke into a style in its own right, present in every medium (film, TV shows, video games, etc.). For some people, it has also become a way of life. Steampunk admirers are also known as Steamers.

The term “steampunk” is still somewhat obscure. However, the genre and its aesthetic have become familiar to the general public through various works.

Watch Out For Colorful Tattoos

The thing is that the steampunk display of colors varies between gold, yellow, brown, and silver or gray. The thing is, especially with gold and silver ink, they usually do not pass the test of time. Let me explain. If you use some beautiful gold or yellow/gold combinations on your tattoo sleeve, I’ll get dull after a while. You’ll end up having to edit your tattoo in a couple of years. Our recommendation is to avoid gold or light yellow.

Honest artists can say the same thing about washed colors. Traditionally, the exact keyword for this phenomenon is “color wash.” But you know what my point is. Water-washed colors are fading through time. And this will make you ink your design again. You will turn into a frequent guest at your local tattoo shop. 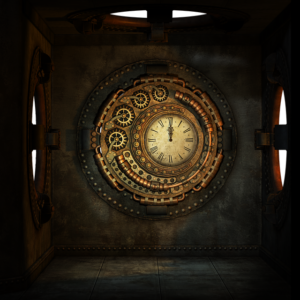 But this is not the end for colors in steampunk tattoo designs. You can always use some color in some parts. For example, if you have a character in your design, like a bird or a gentleman, you could color their beak and hat.

The point of that is to change the focus of the design. Some people will say that this is the way to pop up some parts of your tattoo.

Steampunk Watches: What To Do And What Not To Do

Steampunk clocks are an emblem of the steampunk cultural and artistic movement for a couple of reasons. The idea of time travel is present in many steampunk books. Now, it is logical to go for it on a tattoo. But the thing with watches is their form and shape. You have to be extra vigilant about the placement of your steampunk watch if you desire one. There are some specific parts of the body where this design won’t fit nicely. Be prepared for distortions if you choose to do the tattoo on the shoulder, forearm, or knee.

The fact is that tattoos placed on joints with a high range of movement tend to have quite an elastic skin on top. This means that skin can stretch much more than in every other place.

The back of the torso, the calf, or thigh are the places that won’t assure you there won’t be any distortion, but at least you will know that they will keep the shape way much better than in the areas we described before.

Before you start to develop your steampunk tattoo design, you must take a couple of things into consideration. We have our tattoos for specific reasons, but there is always a basic idea that connects every tattoo. Tattoos are ink that is placed on the body to be seen. It doesn’t matter by whom, but it’s placed there for someone to take a look, whether it is you or anybody else.

Yes, biomechanical tattoos are amazing. They are 100% steampunk in their foundation. That’s because they share this idea of technology through coils and gears, up to the point that they can replace complete parts of us humans. There is, of course, a little of robotics and cyberpunk in there too.

Take care with the level of detail that you place in your Steampunk biomechanical sleeve. And this is a fact: People will regularly see your tattoo from a certain distance, and it’s not important how much distance. The more detailed you create your tattoo, the more difficult it will be for the viewer to distinguish and recognize the parts of your tattoo design. So if you place an enormous amount of detail in your tattoo design, it will look more like a black stain rather than a quality tattoo piece.

We’ve seen these tattoos of all types. There is a reason, or at least it should be, for an animal or a person to be in every tattoo. In Steampunk, certain animals have their symbolism. The birds take a specific place and meaning. This also goes for the classical steampunk girl designs. We are going to talk about characters that are frequently used in steampunk tattoo designs.

Birds represent the ability to fly, and this idea is genuinely expanded in steampunk literature throughout steam-powered aircraft. Birds have an excellent characteristic for steampunk inkers, and that is that birds can have a significant number of details in their bodies and feathers. Tattoo artists usually tend to combine bird figures with valves, tubes, and gears. The result is a mechanized bird.

If we had to choose one bird, we would choose the owl. The owl has additional features. It’s a nighttime wanderer. This adds up a little mystery to your tattoo design. In my opinion, crows and ravens are right next to the owls in this list.

This is another fantastic design. The plague doctor has additional details that the artist can also do in grayscale with no significant issues. This will give you a great tattoo design with a little bit of spookiness behind it. But, all in all, it’s a great meaningful character to have in your skin.

There is an interesting thing about cats and tattoos. They are great for Steampunk because they can be mechanized and still look nice and cute. Cats have this impressive capability of being highly complex in detail as well. But artists can ink them in simpler forms and shapes too. This is an excellent attribute for your artist. He will feel comfortable creating your story with no need to end up with an extremely detailed design. If you want to ink yourself your beloved cat, you can immortalize him in a unique steampunk style.

What To Avoid While Creating Steampunk Tattoo Design?

Maybe human faces. The human face is full of texture and details. This doesn’t mean you cannot do this. This also means that you will need to take extra care when designing and tattooing. Be careful about the size, and everything else will fit perfectly.

Cartoons open up a much bigger space for details and design. Although we’ve just said that artists and customers should avoid human faces, you can have an entire person as a design when in cartoon mode. This is due to the flexibility of the human being to recognize what is a fantasy from what is realistic.

Which designs are Steampunk and fantastic?

You will find primarily skulls, octopuses, pirates, bugs, owls, and other birds. In this way, the specter of potentially good designs widens up. And that is all good. You will be able to get more designs than before.

In this case, you can also add some color to your cartoons: Making them stand out.

There is a significant place for steampunk art style minimalism in the tattoo-ink industry. Designs like gears and coils can be designed with minimal black lines and fit great into tiny areas, such as fingers, wrists, or the neck. Gears can also be done in grayscale or just simple line work, and they will keep having this glamorous feel for years.

We can achieve other symbols in a minimalistic design: the plague mask and doctor, wrenches, zeppelins, submarines, and cyborgs such as animals like birds or bugs. All of these are interesting designs with a lot of potentials that will go along with the rest of your steampunk inspiration.

Try not to create tiny (or small) tattoos in steampunk style. Due to the amount of detail of the designs, these tattoos are prone to be “deformed” in the years to come. Imagine yourself with a small tattoo that includes a landscape with air-flying ships, steam, tubes, pipes, clocks, etc. The conclusion is that those types of tattoos are not entirely pleasant to the viewer’s eye.

The basic size we recommend is six inches in height x four inches long for figure tattoos. This is a pretty nice dimension that tattoo artists can work on.

If you go for bigger designs, especially in the upper torso, we suggest going for full sleeves. Why? Because ink sleeves have different themes on the same everyday basis. A full sleeve will give you the possibility of combining content from various inspirations.