Christians have adopted the anchor cross or the cross of hope, and the crux dissimulata (the disguised or dissimilar cross) as a symbol of hope. During the time of persecution under the Roman Empire, as the anchor was regarded in ancient times as a symbol of safety. Not surprisingly, Christ himself is seen by these early Christians as “the hope we have as an anchor of the soul, both honest and faithful,” by those who believed in him: Saint Peter, Saint Paul, as well as several of the early Church Fathers speak in this sense.

During the third century, in Rome, Christians were persecuted to such an extent that they dared not to use the cross as their symbol for fear of exposure. The crux dissimulata has been created with the intention that a non-Christian would not be able to recognize it as a Christian or church symbol or object of worship. This cross was also the emblem of St. Clement, who was the Bishop of Rome, the first pope to succeed Saint Peter), who, according to lore, was tied to an anchor of iron and tossed into the sea at the order to the emperor Trajan. 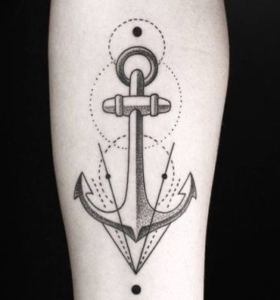 It is also believed that pirates also had anchor cross tattoos, though the skull and crossbones are commonly connected with them. When we take a look at the anchor in nature, it serves only one purpose: holding the ship steady in the water. When the anchor is dropped, the water cannot budge the boat. We can actually grab some of the symbolic meanings of the anchor from these facts. Besides affiliation, stability may be one of the most common meanings of the anchor tattoo.

When we look at the anchor cross in general, we can come close to understanding all of its symbolic meaning. As we already said, one of its definitions is stability – it can symbolize that you are a steady person in your life and that everything is falling into place. Another variation is that you have stable surroundings. In most cases, this refers to your family. The symbols which are commonly associated with the anchor are cross, flowers, hearts, wings, nautical stars, ribbons, eagles, and skulls.