The triskelion, or triskele, represents a triple spiral design consisting of three symmetrical swirls emanating from a single point. This symbol has been part of many ancient cultures across Europe and Asia but is most historically associated with Irish and Celtic art and design. 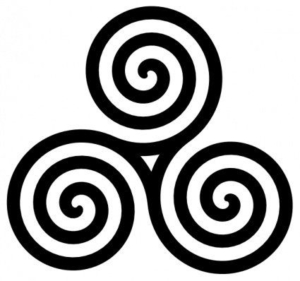 The earliest examples of the triskelion originate from Malta, and many Greek ships and coins have the spirals stamped upon them. Greek pottery even illustrates warriors holding triskelion-embossed shields. Pliny the Elder believed that the triskelion in Sicily—an emblem of the island both ancient and abiding, continued presence on the flag—originated in the island’s triangular form.

Even though many triskelion-adorned artifacts from continental Europe have survived, the triple spirals are most commonly linked to the ancient Irish culture and tradition.

Meaning of the Triskelion symbol

There is no information pointing to the triskelion’s meaning in Celtic and pre-Celtic Irish culture. Still, credible theories abound, often related to the many triplicities in Celtic belief and life. Some examples of the triskelion spirals’ trios are believed to symbolize: land, sea, sky; life, death, rebirth; past, present, future; father, mother, child; the three trimesters of human pregnancy; and many other meanings.

The triskelion’s three legs appear to move outward from the center, signifying motion, mainly circular motion, which was of most importance to the Celts. This is because most of their legends involved rebirth and, like many ancient cultures, believed in nature’s cyclicality. The symbol is often linked to Manannán mac Lir known as the Celtic god of the sea. Even today, the sole adornment on the Isle of Man’s flag, which people believe was named after him (though some argue the other way around—that Manannán was named for the island), is three legs compose a triskelion spiral motif.

Whatever the motif’s meaning and symbolism, or perhaps precisely because of its symbolic flexibility, it was a prominent symbol in Celtic design throughout Ireland and Europe. The spirals, together with other geometric designs, were ordinary in the La Tène period (from roughly the fifth through the first centuries B.C.); art from this period was seldom figurative—human and animal forms did not frequently appear until after the extend of Christianity.

Plentiful examples of design from this period survive. Celtic jewelry made of gold and silver was often carved with repeating triskele or other similar designs. Jewelry could constantly be a pointer of status in Celtic culture and society. Many nobles wore torcs—ornate and heavy collars carved or stamped with complex designs. Usually, the larger or more complicated the metalwork, the more important or influential the wearer was.

The Triskelion symbol in early Christianity

Christianity spread throughout Hibernia by the fifth century when Ireland and the British Isles were the last strongholds of Celtic culture. The already-popular triskelion was included impeccably into Christian iconography. This is because the three spirals could symbolize the Holy Trinity as easily as they did the multitude of pre-Christian triplicates.

The triskelion started appearing in Insular (early Celtic Christian) art, along with Celtic knots and Celtic crosses and is found persistently in the designs of illuminated Celtic manuscripts. Lots of triskelia appear in the famed illustrations in the Book of Kells, in addition to meticulous depictions of humans, animals, and plants, which had formerly remained absent in Celtic art. The three whorls are also a usual adornment on round windows of gothic cathedrals all over Europe.

The symbols maintain to emerge in modern culture. Not only serves for ornamenting Sicily and the Isle of Man’s flags but also the coat of arms of Füssen incorporates three black legs in a triskelion spiral on a yellow background. It is the main design on the United States Department of Transportation’s seal, and it inspired the emblem of the Irish Air Corps, which features an orange, white, and green tricolor swirl. It also represents the BDSM community, which often uses a white triskelion-like symbol on a black background as their emblem. The image has been included in modern Neopagan groups, who favor it for its Celtic links and the same beliefs.

It even finds its way into science fiction and fantasy pop culture. For instance, a 1968 episode of Star Trek is called “The Gamesters of the triskele.” Moreover, in the Marvel Comics universe, the intelligence agency S.H.I.E.L.D. It uses a building named triskele as their head office. The 2011 MTV series Teen Wolf drew influence from Celtic lore and used the triskelion symbol repeatedly. In Merlin, a 2008 British fantasy T.V. series, the triskelion was a symbol of the druids.

In Japanese Shinto culture, the god Hachiman is the god of war-or more appropriately, the god who instructs warriors. His symbol is a triskelion-like spiral named a tomoe, often translated as “comma.” A threefold tomoe often decorates shrines to Hachiman, who is also connected to the number three, and it is usually used as a family crest or badge.

One of the designs of Tibetan Buddhism is called Gankyil, which is a triple spiral called a “wheel of joy,” representing many of the triplicities in Buddhist life: ground, path, fruit; the three ways in traditional Tibetan medicine—desire, hatred, ignorance; learning, reflection, meditation; essence, nature, energy; and many others. It incorporates three blades, similar to the two Chinese Yin-Yang symbols that form one circle. The Korean Taegeuk is a similar design and generally integrates interlocking semicircles of different colors linked to Korean Daoism and shamanism.

However, not all modern triskelion spirals have such positive and peaceful connotations. For instance, the A.W.B., a South African neo-Nazi group, uses a triskele assembled by three black sevens in a white circle, surrounded by a red background for their emblem. The motivation and inspiration for the image come from the Nazi swastika. This symbol was formed in 1973 when the A.W.B. was restless to establish a purely Boer-Afrikaner (read: white) state.

The triskelion’s extensive use speaks to the dominance of the number three in many religions and cultures worldwide. Of course, it is still most broadly recognized as a Celtic symbol. This symbol is nowadays part of the Celtic-inspired tattoos and in modern Irish jewelry. Unlike its frequent counterparts, such as the shamrock or the Claddagh, the geometric swirls instantly hearken back to an older, ancient, pagan Ireland.