Home
Blog
Think Twice Before You Get One Of These Nine Tattoos!

Because of this, when you think of getting a tattoo, you should better research, as something as innocent-sounding as stars on your knee or a teardrop or some number patterns may have different parts that are connected with a criminal gang and Russian mafia.

While some of them are widely approved, others may not be, as they hold different meanings.

So, before you rush out and find a tattoo artist to tattoo you a spider web on you, you should read on and find out why you should be very careful about getting one.

One tattoo artist, named Maxime Buchi, said that he would do tattoos like epaulets on the shoulders, ornately tattooed rings on the fingers or stars on the knees on one condition. 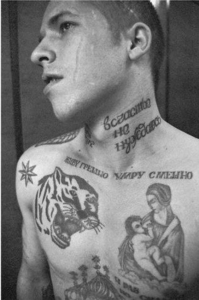 He would use a style that is not connected with the Russian mafia or criminal organizations, so people will not ask if they are related. He also admits that the era of the Russian mafia tattoos faded and some of these designs are quite trendy today.

He also says that the new generation of Russian gangsters does not care about tattoos.

Since Guy Fieri has ruined the flame job, a spiderweb on the elbow or the shoulder cap appeared more appealing. The spider web is seen as a traditional tattoo, usually as of its longtime connection with prison. Originally, it represented time served – cobwebs formed during long hours wasting away in a cell. The web indicates being caught by the law or being caught in the web of gang life.

A lot of people do not make this connection anymore.

Tattooing teardrops at the corner of the eye are generally connected with gang life, in which drops represent different things: a person you have killed, losing a family member or a friend, time served in jail, or even a symbol of grief. For example, Amy Winehouse drew a teardrop on her face after her husband was jailed.

Teardrop tattoos have been popular and trendy recently, chosen by hip-hop artists that include Lil Wayne, The Game, and Birdman.

You probably think that getting a tattoo of a crown with gemstones means princess, but before you choose it, do some research. For instance, a crown with five points is a symbol of the Latin Kings. Based out of Chicago, with members everywhere, they are one of the biggest gangs or civic organizations in the country.

Also, the letters ALKN meaning Almighty Latin Kings Nation can be found nearby the crown, so think twice before you get it.

Dots are the hesitation marks of a stick-and-poke tattoo, a style which is in recent times quite popular. Coupled together, dots send subculture signals: three dots in a triangle is a common motif that is often found on hands and around the eye that once signified gang life.

Five dots placed like they are on a playing die, are often found on the webbed part of the hand and also represent time served in prison.

Skulls make cool tattoos. Flying skulls make even cooler tattoos. However, the death head skull with the wings is the Hells Angels’ official decoration, and you probably don’t want to wear it when active members of the motorcycle club are around. As if they do not beat you up or remove it for you, they will sue you.

The famous actress Penelope Cruz has 883 on her ankle. Rachel Wood has 15 behind her ear. Zoë Kravitz has a five on her wrist. Numbers mean various things to different people – a wedding date, special birthday, or remembrance for a lost friend or even what California area code you represent.

Dangerous people adore number tattoos. For instance, the notorious 18th Street gang uses 18.MS-13 and the Surenos share the number 13 with everyone that has ever gotten one of the $25 Friday the 13th specials at a tattoo shop.

The white-power skinheads usually sport 88 and 14. The first one represents H, which is the eighth letter of the alphabet; HH stands for Heil Hitler.

In the ancient Sanskrit, the swastika has been a symbol that means well-being. It has been good luck marking by a surprising number of groups, which include Ancient Greeks, Anglo Saxons, Hindus, Buddhists, and some members of the Jain faith. Coca-cola and Carlsberg also used it to market their beverages.

Hitler also rained on that parade. Later, the symbol was corrupted, and a lot of tattoo artists will not ink it anymore, even if they do not know its original intent.

Even though face tattoos are not uncommon anymore, they are certainly not mainstream – one of the reasons is that tattoo artists are reluctant to do them on clients that are not already covered in body art.

It is not for adhering to a criminal code or making some moral judgment. Still, Buchi says that it is about having respect for the traditions, which means something to tattoo artists like not getting your hands, neck, or even face done before you have a chance to earn it.

Tattoo artists, as well as makeup brand founder Kat Von D, was also aware of the ramifications and described the stars around her eyes as a symbol of having the ability to be heavily tattooed and still carry yourself in a trendy and feminine way.

So, people, just because you can put some design on your body, does not necessarily mean that you have to. So, you should think before you ink.