Tattoos form part of the culture of humans for a long time – for thousands of years. There are tattooed human remains that were found to date back to 5000 BCE. Nowadays, beautiful tattoos are body art. They are largely spread, with a larger portion in younger people, and slightly more in adults, especially women.

Sometimes, tattoos are proof of social status. They can also find their uses in warding off evil and identifying membership in a group. For many years, people marked their skin permanently and deliberately applying various ink or pigment types.

Just like we said before, tattooing is a practice in many different cultures. Each of these cultures uses tattoos for different reasons too.

One of the principal uses of tattoos is to adorn and decorate our bodies with something permanent. We usually decide to get tattoos because we love body art, or we simply want to honor someone or something.

There are numerous tattoo designs in the world, and they also vary in different traditions and cultures. Some of them are religious, while others can be of animals, objects, prison or gang tattoos, floral, maritime, etc.

Each tattoo design has its specific symbolism, meaning, and history, and belongs to a certain tradition or culture.

Here, we will talk about six tattoo designs that aren’t common among tattoo lovers. These tattoo designs are rare, but they have their place in tattoo art too:

The garland combines the symbolism of both the circle and the flowers. The garland finds its uses in tattoo art in order to encircle arms, ankles, wrists, and navels sometimes.

Although specific flowers have definite symbolic associations, the garland generally stands for positive aspects. Those positive aspects usually are fertility and good luck, and also the union of this world with the next one.

The Han, or name chop, is a type of signature seal, developed in China, and utilized since the Shang dynasty. It was the precursor to printing but utilized the identical principle of a hand-carved block of jade or some other type of attractive stone. This stone was then pressed into a red ink paste made of cinnabar and stamped onto a painting or some document. For business purposes, the Han found its use as a signature.

The most frequent use of tattoo art comes either in the form of Japanese tattoo, or re-creations of Chinese artwork. Here, it found its applications as a signature of the artist, almost always in a square of red, in Japanese or Chinese characters. 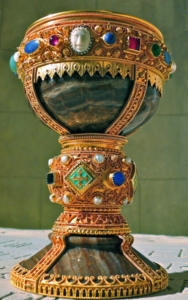 The grail, which we also know as the Holy Grail, is the subject of much speculation and legends. It is the chalice that Christ used at the Last Supper, shortly before his crucifixion, and death. In the traditions of the Knights of the Roundtable, the Holy Grail had the power to provide food, light, and invincibility. It symbolizes the spiritual risks of seeking enlightenment and an attempt to transform the heart and soul to attain it.

Jung summed this up by saying that the grail was “the inner wholeness for which men were always searching.” Tattoos of the Holy Grail are emblematic of all the aspects. They attempt to capture the radiance around what might otherwise be an ordinary cup.

The two male or female symbols, when joined together, represent the gay love, and also the gay movement. This is a tattoo design that gay partners use in order to symbolize their love or their sexuality.

The lamp, the genie in the bottle, or also the ring, is one famous part of the tales in the collection titled the Thousand and One Nights. The genie is an inspiration from the Arabic Jinn or Jinni in the plural. The Jinn is a supernatural being on par with devils and angels.

It has the ability to dwell within all manner of inanimate objects, and can also punish humans for any harm to it. They can do that intentionally or unintentionally, but it will also serve humans that know the proper magical procedure.

Tattoos of genies that are summoned vary from well-muscled, grant male genies that smoke surrounds, to diminutive females in Persian attire waiting in their jeweled bottles. Being an interesting cross of good luck sign and protective symbol, genies summon, and represent something quite magical.